Enrique Martínez Celaya (born 9 June 1964) is a Cuban artist whose work consists of paintings, sculpture, photography, poetry, and prose presented in contexts he calls Environments. His artistic project pushes the boundaries and limits of art, literature, philosophy, and religion. Martínez Celaya uses the human figure in the landscape as a means to explore the nature of human experience and the search for meaning, which dwells in the transient world of time and memory, identity and displacement. Enrique Martinez Celaya is represented in Europe by Galeria Joan Prats (Barcelona) and Gallery Arndt Berlin (Berlin); in the United Kingdom by Simon Lee Gallery (London); in Asia/South Pacific by Liverpool Gallery (Sydney, Australia); and in the United States by L.A. Louver (Venice, California) and Baldwin Gallery (Aspen). 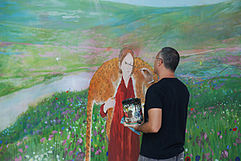 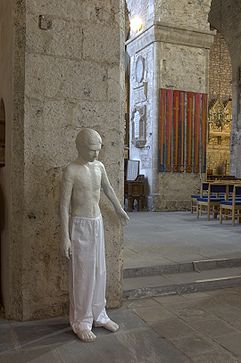 Enrique Martínez Celaya was born in Palos, Cuba on June 9, 1964. He was uprooted at age eight to move with his family to Spain. Three years later, his family moved to Puerto Rico, where he was apprenticed to painter Bartolomé Mayol. His childhood experience of exile plays a formative role in his artistic practice.

Martínez Celaya came to the United States in 1982 as a physics student. He received a BS in applied physics from Cornell University in 1986 and pursued doctoral work in quantum electronics at the University of California, Berkeley in 1989. He built a laser, received prizes from the Department of Energy and the National Congress of Science, achieved recognition and patents for his work at Brookhaven National Laboratory and the Electronics Research Laboratory in Berkeley. While pursuing his research on lasers and laser delivery systems he continued to paint and write . On the verge of completing his doctorate in physics, Martínez Celaya abandoned his studies to pursue painting as a career, earning an MFA with honors from the University of California, Santa Barbara. He received a fellowship to attend the Skowhegan School of Painting and Sculpture in Maine.

Martínez Celaya uses simple imagery heavy with symbolism, such as the solitary human figure in the landscape, birds, deer, rainbows, dogs, and apples heavy with snow. Despite these representational images, his work resists narrative and moves towards the iconic. It draws from the prose of Jorge Luis Borges, Herman Melville, and Leo Tolstoy; the poetry of Paul Celan, Osip Mandelstam, Harry Martinson, and José Saramago; the philosophy of Schopenhauer, Martin Heidegger, Hegel, and Ludwig Wittgenstein; the paintings of Velasquez, Casper David Friedrich, and Ferdinand Hodler; Kurt Schwitters's Hanover Merzbau; the social practice of Joseph Beuys and Paolo Friere; the films of Andrei Tarkovsky; and the music of Bach.

Cowboy Junkies: The Nomad Series: The most recent iteration of an intimate and unique collaboration between the Canadian band Cowboy Junkies and Martínez Celaya consists of a four-volume album project inspired by Nomad, a series of paintings on view at the Miami Art Museum in 2007. The first two albums, Renmin Park and Demons, have been released to critical acclaim.

The Crossing, The Cathedral Church of Saint John the Divine, New York (1 October-27 November 2010): A series of four monumental paintings made especially for and in response to the nave of the Cathedral that tests art's metaphysical and ethical potential.

Daybreak, L.A. Louver, Venice, California (20 November 2008-3 January 2009): The environment consists of thirteen paintings and two sculptures that use the relationship of the solitary human figure to the vast and stark landscape to reflect on the nature and structure of experience, recollection, and aspiration.

Nomad, Miami Art Museum, Miami, Florida (2007): The exhibition consisted of five large-scale, oil-and-wax paintings, which explores issues of exile and rootlessness through the seasons. Inspired by the works of Swedish poet and Nobel Prize laureate Harry Martinson, the paintings evoke a dream-like state of suspension in which the exile lives: time passes and yet nothing changes.

Coming Home, Sheldon Museum of Art, University of Nebraska-Lincoln (2006): A re-installation and re-interpretation of Coming Home (2000), a sculptural group that consists of a boy and a gigantic deer, which was donated to the museum by well-known German collector Dieter Rosenkranz in honor of the University of Nebraska's commitment to Martínez Celaya's work. The sculpture group was presented within an ambitious photographic environment.

Schneebett, Berliner Philharmonie in Berlin, Germany (2004): The final stage in the artist’s Beethoven cycle, this large-scale installation uses Beethoven's deathbed as a means to reflect on the integrity of life decisions in confrontation with the finality of death. The project also included performances by the orchestra and a public lecture sponsored by the American Academy in Berlin. The installation was recreated as the inaugural exhibition for the Rosenkranz Kubus at the Museum der bildenden Künste Leipzig, Germany (2006). With its focus on human frailty, it served as a counterpoint to Max Klinger's sculpture of Beethoven as a nationalist hero which is on view nearby.

Martínez Celaya founded Whale and Star in 1998, a publishing house that specializes in art and art's relationship to other intellectual and creative fields, especially literature and philosophy. The University of Nebraska Press serves as Whale and Star's primary distributor. Recent titles include:

Martínez Celaya also created the watercolors for a children's book "The Return of the Storks" written by Lorie Karnath and published through Akira Ikeda Gallery in Berlin.

In 1994, Martínez Celaya was appointed Assistant Professor of Painting at Pomona College and the Claremont Graduate University, where he taught until 2003, when he resigned his tenured position of Associate Professor. He continues to be a popular and influential teacher throughout the country. He is currently a faculty member at the well-known Anderson Ranch Arts Center, Snowmass Village, Colorado. He was also appointed Visiting Presidential Professor at the University of Nebraska (2007–2010), where he is developing interdisciplinary conversations between artistic, religious, scientific, philosophical, and literary practice. In addition to these appointments, Martínez Celaya has lectured at the School of the Art Institute of Chicago, Joslyn Museum of Art (Omaha, Nebraska), Miami Art Museum, Denver Art Museum, Hope Center (Richmond, Virginia), and the Berliner Philharmonie and the American Academy in Berlin.

Celeya joined the Phi Kappa Psi fraternity at Cornell University, and through that organization, the Irving Literary Society.[1]

"Being ethical away from the world is easier than in the world. I think some people see the path of abstraction as pure, uncompromised, but it could just be avoidance; artists who insist on removing their work from human struggles take a tidy path, which seems especially wasteful for those whose lives are in turmoil and confusion."[2]

"Time is an insurmountable gap only negotiated through memory, remembrance, regret, longing, love. I think we are rarely blessed with the ability to see the present for what it is—all that there is."[3]

"Today, to claim any significance or meaning, even if only to ourselves, is to flirt with ridicule."[4]

"What I have tried to do with my works is to observe--poorly, but better than I would've without art--who I am, who others are, and what the world is."[5]

"Authenticity involves living with the anxiety of death and creates responsibility for Being; certainly the end means we are accountable in life. Or perhaps more concretely: we are accountable at every moment. The final judgment, so apparent in the bed-of-death, is not just at the end, but is always upon us--and every moment, our last."[6]

'The End of Tragedy' (detail), oil, graphite, varnish and collage on paper by Enrique Martinez Celaya, 1995, The Contemporary Museum, Honolulu