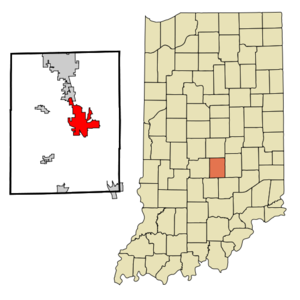 There are two small waterways in Franklin, Young's Creek and Hurricane Creek. These creeks flood frequently, and their small floodplain form the basis of Franklin's walkways and parks, which extend the entire legnth of the town. Hurricane Creek empties into Young's Creek in Province Park, downtown, and empty into the Big Blue River farther South. There is also an underground river that flows beneath Franklin. In 2008, all three of these streams overflowed in the , which damaged or destroyed over 100 homes throughout Franklin, including some entire neighborhoods.

There were 6,824 households out of which 37.6% had children under the age of 18 living with them, 54.7% were married couples living together, 12.5% had a female householder with no husband present, and 28.6% were non-families. 23.6% of all households were made up of individuals and 8.4% had someone living alone who was 65 years of age or older. The average household size was 2.58 and the average family size was 3.04.

The small town became nationally famous during the 1920s due to the fame of the local basketball team that became known as the . A small group who had played together as boys led by and coached by Griz Wagner went on to become the first high school team to win the state championship for 3 consecutive years (1920-22). They then moved on to local where they were proclaimed national champions in 1923 and even turned down an offer to play the top professional team New York Celtics.

Downtown Franklin is noted for the number of well-maintained, older houses. Landmark buildings include the .

The Franklin Parks & Recreation Department maintains several miles of walking trails which connects various parks, community centers, the public library, and the public pool. The park was closed for the entire Summer of 2008 due to flood damage. [" [http://www.indystar.com/apps/pbcs.dll/article?AID=/20080827/LOCAL0403/80827044 Flood-damaged park repaired, reopening in Franklin] " from , accessed 29 August 2008]