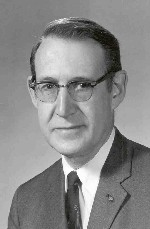 Harold (Hal) Chestnut ( , Albany - ) was an American , who contributed to the development of the fields of and .

Harold Chestnut was born in 1918. He studied at and received a degree in 1939 and a degrees in 1940. In that same year he began a life-long career with the , which would last until his retirement in 1983. He married his wife Erma Ruth Callaway Chestnut in 1944 and they had three sons.

During the Chestnut was both a student and an instructor in General Electric's well-known Advanced Engineering Program. He worked on the design of the central fire-control system and remotely controlled gunturrets used on the B-29 aircraft. [ [http://www.ewh.ieee.org/r1/schenectady/current_source_april2002.pdf In memoriam—Harold Chestnut] IEEE the current source, Vol 28, no 1, April 2002.] Later he worked in the Aeronautics and Ordnance Department and the Systems Engineering and Analysis branch of the Advanced Technology Laboratory, where he served as manager from 1956 to 1972. Here he worked on a wide variety of technical problems including reliability issues in rapid transit and the to the .

From 1957 to 1959 he was the first president of the (IFAC). After his term as president he chaired the technical board, from 1961 to 1966 and the technical committee for another three years. He served as honorary editor from 1969 to 1972 and was the first advisor appointed for life in 1984. Chestnut was also involved in the since its establishment in 1963 and served as president in 1973. He was active in the formation of the IEEE History Center and the International Federation of Automatic Control.

In 1961 Chestnut edited Automatica: The International Journal on Automatic Control and Automation. He also became editor of a John Wiley book series on and analysis. In this series Chestnut published his own books.

In the 1980s and 1990s after retirement he create the "Supplemental Ways ofImproving International Stability (SWIIS) Foundation" to identify and implement "supplemental ways to improve international stability". He devoted those years to this effort in which he applied principles from the control field, such as stability and feedback, to international political realities.

Harold Chestnut received many awards: In 1966 he received an Honorary Doctorate in engineering from Case Institute of Technology, Cleveland, and in 1972 from Villanova University. In 1984 he won the IEEE Centennial Medal and in 1985 the AACC Bellman Heritage Award. Chestnut further in 1981 received the prestigious Honda Prize for ecotechnology, with it a substantial financial award from the Japan’s Honda Foundation. [ [http://www.hondafoundation.jp/en/project/hondaprize/list1980.html Hondaprize 1980] . Dr. Harold Chestnut was awarded:
* For his achievements associated with the promotion of humanitarian use of technology as a world leader in systems engineering that encompasses electrical, electronic, instrumentation, and automatic control.] He was further a Fellow of the AIEE, ISA, and AAAS. He was elected to the US National Academy of Engineering in 1974 and selected as a Case Centennial Scholar in 1980.

In 1998 Harold Chestnut and the Chestnut Family provided a gift to IFAC for the IFAC Textbook Prize. The income from this generous gift is used to fund the award for an outstanding textbook author recognized at each IFAC Congress.

Harold Chestnut worked in the fields of , and .

Chestnut's early control work concerned stability issues in electric power systems. The design and manufacturing of electric power system components - generators, transformers, motors, etc. was a major part of GE's activity then and now. In the late 1940s he wrote his first book about this. This pace-setting volume established his reputation as a leading figure in the international control community.

The International Federation of Automatic Control (IFAC) is an international federation for organizations concerned with . The aims of the Federation are to promote the science and technology of in the broadest sense in all s, whether, for example, engineering, physical, biological, social or economic, in both theory and application. The federation is also concerned with the impact of on society. [ [http://www.ifac-control.org/ IFAC] website 2007.] The federation was founded in September 1957, after a year of preparation by a working group suggested by Chestnut. It came into existence under the leadership of its Executive Council and first president Harold Chestnut. It consisted of representatives from West Germany, the USSR, France, the United Kingdom, Poland, and the USA. In the midst of the Cold War, IFAC was organized as a federation of national member organizations, the only model acceptable at that time to organizations behind the .

In the 1970 article "Information requirements for systems understanding" Chestnut categorizes the basic information requirements for describing systems as:
# Structure, the interrelationships of the system's parts;
# Distinguishing qualities, what differentiates the system from other structures of a similar form or nature; and
# Magnitude, probability, and time. Chestnut argues that knowledge of these parameters could prevent unnecessary duplication of effort and more efficient use of and .