The Dv12 (Sv12 and Sr12 until 1977[1]) is the standard Finnish medium-weight diesel-hydraulic road locomotive operated by VR. As all the main lines of Finnish railway network have been electrificied, the locomotive is designated mostly to unelectrified, less frequently used side lines.[2] Occasionally it may still pull cargo trains on main lines. It has also been put in service as a shunter, replacing older classes Dv15 and Dv16 as they were retired. A total of 192 locomotives were built by Lokomo and Valmet between the years 1963 and 1984.[3][4] As of 2011, the oldest Dv12 units are 48 years old.

A Dv12 class diesel locomotive passes Huutokoski while pulling a regional train from Pieksämäki to Joensuu. 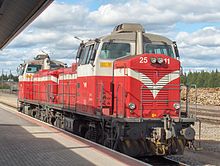 The Dv12 is a general purpose locomotive which was designed for both passenger and cargo train use. Its 1000 kW power is somewhat low by current standards, but it is capable of multiple-unit operation with only one train crew and doublets and triplets are common.[1] It has a low axle load of 15.6 tonnes, which makes it very well suited for branch lines that allow only smaller axle loads.[1] All the axles are interconnected with shafts and universal joints to the Voith L 216 rs hydraulic transmission.[2] Because all axles must rotate at the same speed, the individual slipping of axles is impossible. This translates into a very good tractive effort for a 62 tonne locomotive. The main engine is a Finnish-built Tampella SACM MGO V16 BSHR Diesel with two Brown Boveri-VTR 200 M turbochargers.[1]

Between 1965 and 1972, 60 slightly heavier variants of the Sv12 were built.[5] These were assimilated in the same series when their nomenclature changed to Dv12.[5]

Dv12 number 2501 was modified between 1978 and 1980 to run on electricity instead of diesel, becoming class Sv1 number 3201.[6] The locomotive was used first in freight traffic, later in passenger trains between Helsinki and Imatra.[7] The Sv1 was used to test three-phase alternating current electrical engines; the results were used when developing class Dr16.[7] The electrical components were delivered by Strömberg,[6] which was also involved in the Dr16 project. The locomotive was painted yellow with black stripes, a colour scheme known from another short-lived prototype, the Dr15.

In 1984, after four years of testing, the Sv1 was refitted with a diesel engine, returning to its original nomenclature and number.[6] Number 3201 is nowadays used on an Sr2 class locomotive. As of 2011, Dv12 number 2501 is still in use.