The Dr16 is a class of diesel-electric locomotives used by VR (Finnish Railways). The 23 locomotives have a single, off-centre cab and are currently VR's most powerful diesel locomotives. Their nickname is "Iso Vaalee" (Big Blonde). They are presently mainly used on heavy freight services in northern Finland; their main passenger duty is the haulage of trains on the non-electrified line between Kemi and Kolari in Lapland.[1] Dr16 locomotives were also used extensively on the line between Oulu and Rovaniemi, prior to the completion of the electrification of the line in 2004.[2]

In the beginning of the 1980s, Valtionrautatiet needed new locomotives to replace its aging Dr12 and Dv12 class diesel locomotives.[3] The company had installed a bigger engine on a Dr12 (which became the Dr15) and modified one Dv12 to run on electricity instead of diesel.[4] However, the company wanted a totally new locomotive, and finally chose Valmet's type M in 1983, with Strömberg providing the electrical components.[5] VR originally ordered 23 locomotives[6], with an option of 20 more when the first series were delivered.[7]

It was originally planned that two locomotives would be first built as prototypes[6], the first of them being fitted with a Wärtsilä engine and the second one with the Pielstick.[8] While the first prototype ran on its own on 22 April 1985 for the first time[9], the Pielstick was under its engine cover due to the Wärtsilä proving three tons too heavy.[8] When completion of the Wärtsilä engine was delayed a second time, the second prototype was also fitted with a Pielstick. [10] Due to these engine problems, the number of prototypes was extended to four on January 1986.[10] The locomotives, numbered 2801-2804, were taken into service in 1985-1987[11]: the first two had a Pielstick engine, the latter two a Wärtsilä.[10] On 13 March 1989 VR confirmed that Pielstick engines would be fitted on all the upcoming locomotives.[12] The Wärtsilä engines were kept on the two prototypes, as refitting them would have been too costly.[13]

After an extensive testing programme, the 19 series locomotives were delivered between 1990 and 1992.[14] The manufacturer had anticipated a larger series to be ordered to replace old heavy line diesels (Dr12 and Dr13); however, the rapid progress of the electrification of Finnish main lines decreased the need for new heavy diesel locomotives and thus no further orders materialized.[12] The locomotives were designed and assembled in Finland, either by Valmet Oy at Tampere (numbers 2801-2809) or by Transtech Oy at Otanmäki and Taivalkoski (numbers 2810-2823).[15]

Originally the engines were planned to be of Finnish design (Wärtsilä Vaasa 8R22), but after tests with two prototype locos, the engine type was changed into French Pielstick 12PA4-V-200VG.[16] The Pielsticks produced originally 1660 kW, but in 1997 they were limited to an output of 1500 kW to increase durability.[17]

The locomotive was very modern at its time and it was among the first[6] to use microprocessor-controlled GTO thyristor inverter-driven three-phase asychronous AC motors.[18] The construction is modular[19], and data is transmitted via optical fiber cables between modules.[citation needed] The maximum speed is 140 km/h.[20] The maximum frequency of the inverters corresponds to 156 km/h, and the locomotive has reached that in test runs.[citation needed] The locomotive provides 400 kW 1500V electricity for heating of passenger cars.[21]

The first two prototypes were painted in a white/red livery to go with VR's recent InterCity brand, showcasing the VR logo next to the cab.[22][23] The final livery (starting from number 2803) added some grey on the side of the engine covers.[24] Two of the locomotives (numbers 2816[25] and 2819[26]) have been repainted in a new white/green livery in 2010 and 2011. These have been called Iso Kalpee (Finnish for "Big Pale") by railroad enthousiasts.[citation needed]

An aerial view on the scene of the level crossing accident at Ii. 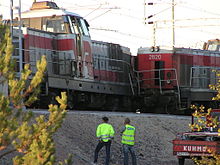 Six locomotives were involved in a shunting accident in Vartius in 2006. All were returned to service.

In addition to the prototypes, one series locomotive, number 2814, was scrapped in 2000 after sustaining serious damage in a level crossing accident near the municipality of Ii.[27][29] After the accident, the obstruction clearing device of the Dr16 was redesigned and strengthened according to the recommendation of the accident investigation board.[27][29]

Also known as type N locomotive (Finnish: N-veturi) or Dv13. It is a smaller work locomotive that implements some of the components of the Dr16.[30] The two locomotives share also the same computer system.[30] It is owned nowadays by Maansiirto Veli Hyyryläinen Oy (part of Destia group).[citation needed]

Valmet originally prepared the Dr12 to be modified as a full electric locomotive while building it, designing it for speeds up to 180 km/h (110 mph).[31] It was estimated that the electric and diesel variants would share 80% of their parts.[32] However, VR finally ordered the Sr2 locomotives from SLM and ABB.