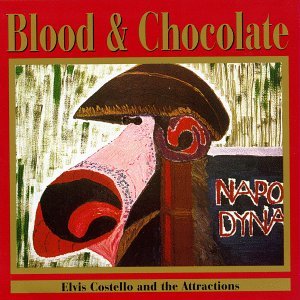 "Blood and Chocolate" is an by . The album reunited Costello, the Attractions and producer , but it was the last recorded by the group before a breakup that would last for eight years. The album was, unusually for its time as a studio album, recorded in a single large room at high volume, with the band listening to each other on monitor speakers rather than headphones. Costello describes it as "a record of people beating and twanging things with a fair amount of yelling".

The album uses to list musician credits and LP sides.

All songs written by unless otherwise indicated.

Note: Instrumental credits were listed in . Translations of , , approximate, at best.