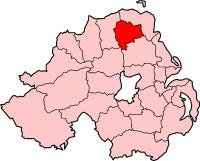 Ballymoney (derive|Irish|Baile Monaidh|home place on the peatland) is a small in , . It had a population of 9,021 people in the 2001 Census. It is currently served by .

The town hosts the Ballymoney Drama Festival, the oldest drama festival in Ireland, which was founded in 1933.

Ballymoney has expanded in recent years and a lot of new houses have been built. This is primarily as a result of high house prices in the // 'Triangle' areas shifting first-time buyers to the less expensive Ballymoney area. Ballymoney is located on the main road between and , with good road and rail connections to the main cities in Northern Ireland, and .

The Ballymoney area has the highest of any area in Northern Ireland, with the average male life expectancy at birth being 78.0 years and 82.6 years for females. [ [http://www.csp.org.uk/uploads/documents/lifeexpectancyatbirth.xls Chartered Society of Physiotherapists (Microsoft Excel spreadsheet file).] ]

The Council is dominated by the . is the second largest party with the , SDLP and an independent making up the rest.

For more information see , which includes a list of incidents in Ballymoney during the Troubles resulting in two or more fatalities.

Ballymoney is one of the oldest towns in with many buildings of historic note in the town centre.
* An old church tower dating from 1637 is the town’s oldest surviving building.
* Another striking feature is the town clock and Masonic hall, built in 1775 by the 6th Earl and 2nd Marquis of Antrim. The hall was used as a market house, courthouse, town hall and school.
* The town hall was erected in 1866.

*One of Ballymoney's most famous residents was , known as the "King of the Road". Joey Dunlop, MBE, OBE was five time World Motorcycle Champion with twenty-four Ulster Grand Prix wins, thirteen wins and twenty-six wins. Joey was tragically killed while racing in during 2000. A statue in memory of Dunlop stands in the town.
* Robert Dunlop, Joey Dunlop's Brother & Record holder for the most North West 200's - he won 15. He died on Thursday 15th May 2008 at the North West 200 2nd Practice.
*, 25th , was born in , the descendant of a farmer from Conagher, near Ballymoney. He was proud of his ancestry and addressed one of the national Scots-Irish Congresses held in the late 19th century. His second term as President was cut short by an assassin's bullet.
*, son of an emigrant from Ballymoney. Signer of the American Declaration of Independence, Revolutionary War officer, drafter of original Delaware state constitution, "President" (later called Governor) of Delaware, Governor of Pennsylvania, Chief Justice of Supreme Court of Pennsylvania.
*, a player of the Irish National Women's Team, was born in Ballymoney.
*John Pinkerton, Home Ruler and MP.
*, a successful comedian, was born in Ballymoney.
*, 1912 Olympic Gold Medalist, men's marathon.
*Samuel Robinson (1865-1958), emigrated to USA and became a multi-millionaire by founding .
* (1881-1949), Popular playwright of early 20th century.
* (1737-1806) of Lissanoure. First British Ambassador to China in 1772.
*Rev. Dr. Peter B. Thompson- Served as an American pastor at the First Presbyterian Church in 1997.
*- Former Northern Ireland Under-21 international Footballer, who plays for Coleraine in the IFA Premiership