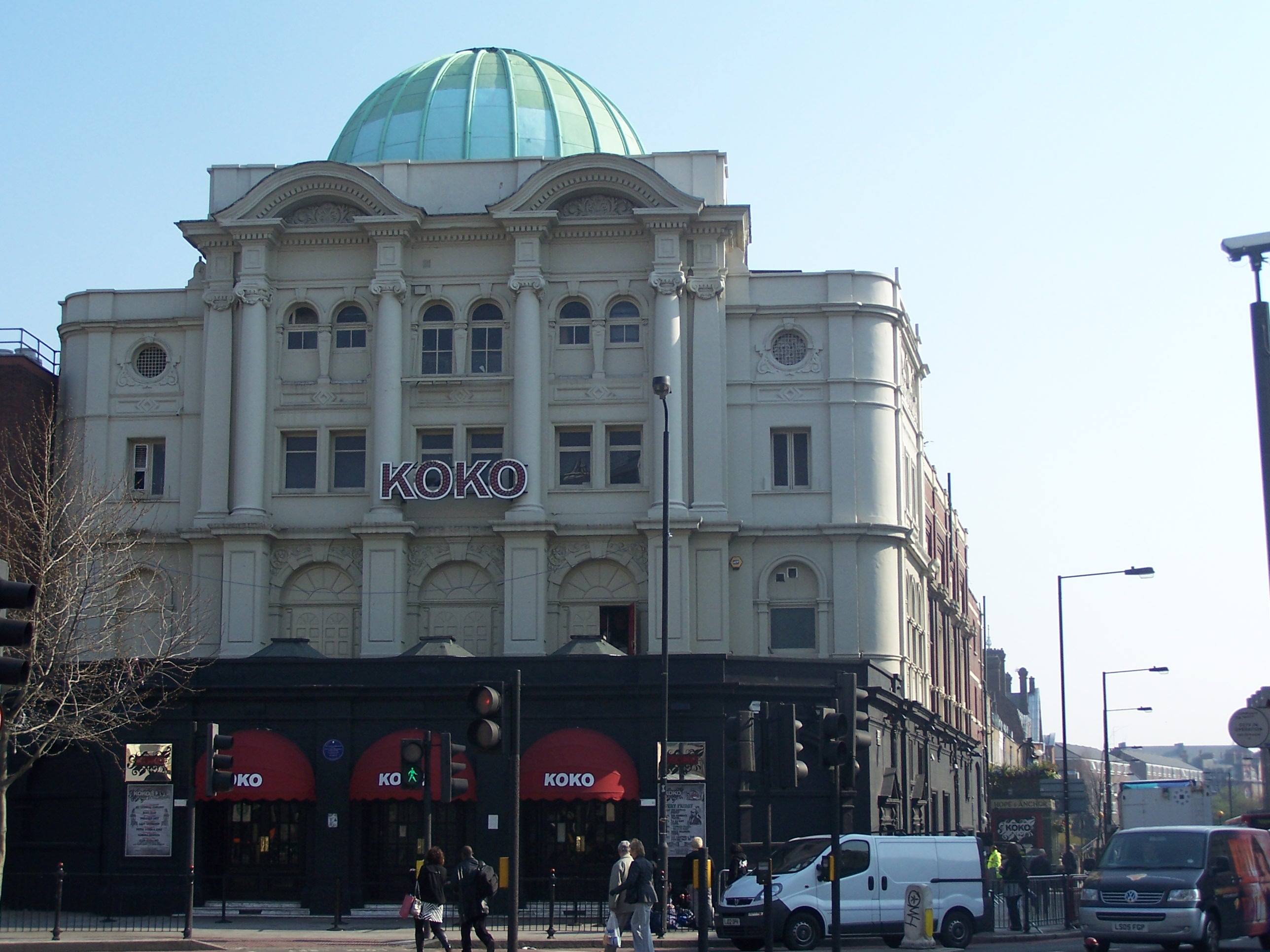 KOKO is a in , , , at the bottom of close to . Until 2004 it was called the Camden Palace. The building is considered to have some architectural significance, and is a listed building.

History of the venue

The "Camden Theatre", opened on 1900, with a capacity of 2,434 it was one of the largest theatres in London outside the West End. The theatre was designed by the prolific theatre architect with an exterior symmetrical stone façade in a Classical style with four stone pillars that are spaced between windows. The building is dominated by a large copper dome, that originally had an open lantern that was topped by a statue. There were also eight statues of classical figures mounted on the corner pediments of the building. Decorated in a with naked female figures holding supports for the boxes and columns, the rectangular marble proscenium is topped by more plaster reliefs of reclining naked women. The ceiling contains a shallow dome. [ [http://www.arthurlloyd.co.uk/CamdenTheatre.htm "Camden Theatre" (Arthur Lloyd)] accessed 21 Nov 2007]

The theatre was opened by , then the most celebrated actress in England, who had lived in nearby Stanhope Street as a child. The "St Pancras Gazette", a local newspaper, commented as follows in a review of the theatre's production of an opera called "" in 1901::"It is a matter of special gratification that the opera was presented at our beautiful local theatre on a scale of magnificence and completeness which would do credit to a West End theatre, but this is nothing new at the Camden Theatre, being rather a continuation of the policy with which the proprietors started their enterprise, viz. to offer nothing to their patrons but standard work, which has received the unmistakable approval of critics and public." ["St Pancras Gazette" (1901)]

Closed during , it survived the mid 20th century, when many similar buildings were demolished, including Camden Town's other theatre, the , largely because it became a theatre from 1945, however some voices called for its demolition in the 1970s. Programmes recorded at the theatre included the . The BBC moved to the in 1972, and it became a live music venue, called "The Music Machine", and in 1982 became the "Camden Palace", and in 2004 it was redeveloped and renamed once again as "KOKO", with a capacity of 1,410. The previous industrial fittings of the Camden Palace were removed and it was repainted in a dark red colour and fitted with brand new sound equipment. [ cite web | title=A Unique Venue With a Unique History | work=KOKO corporate web site| url=http://www.KOKOcorporate.com/index2.html | accessdate=2006-06-27 ]

Since then it has hosted concerts for bands like of , Madonna, Prince, , and and has regular weekly club nights. The video for the Placebo's "" single was shot at the venue. performed a concert in January 2007 at the venue, broadcast globally on Disney Channel under the title "" Additionally, Testament's "Live in London" cd/dvd release was recorded and filmed on , at KOKO. The American played an exclusive private gig here, hosted by Radio 1 on . The programme is recorded at KOKO.