Austria Vienna's bench and technical area during a match in 2005

A technical area in association football, is where a manager, other coaching personnel and substitutes are allowed to occupy during a match.[1]

The area, where people may stand or sit, includes the dugout, bench and a marked zone adjacent to the pitch.[1] 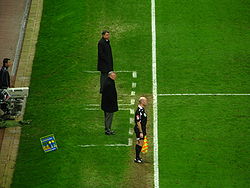 The first football stadium to feature a dugout was Pittodrie Stadium, home of Aberdeen FC, where dugouts were introduced by trainer Donald Colman in the 1920s. He wanted a place to take notes and observe his players without sacrificing the shelter provided by a grandstand.[2]

The defined space of the technical area was established in the notes section of the Laws of the Game by FIFA in 1993.[1]

The technical area is marked by a white line, varying in size but always "1m (1yd) on either side of the designated seated area and extend[ing] forward up to a distance of 1m (1yd) from the touch line," according to the Laws of the Game.[1]

Managers may not cross the line during play, which restricts them from approaching the pitch. In 1999, FIFA put the fourth official in charge of enforcing this rule, although substitutes may warm up along the side of the pitch.[1]