Obersturmführer
The title of this article contains the character ü. Where it is unavailable or not desired, the name may be represented as Obersturmfuehrer. 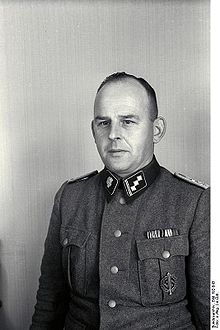 An SS-Obersturmführer serving in KZ Mauthausen.

The insignia for Obersturmführer was three silver pips and a silver stripe centered on a uniform collar patch. The rank was senior to an Untersturmführer (or Sturmführer in the SA), and junior to the rank of Hauptsturmführer.

David Niven's British sapper character wore a captured SS uniform with this insignia in the 1961 movie The Guns of Navarone.