Coat of arms of Sunderland

Coat of arms of Sunderland 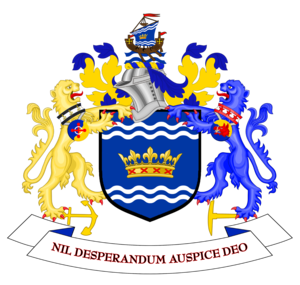 The Coat of arms of Sunderland City Council, granted by the College of Arms in 1992

The Sunderland Corporation first assumed a heraldic device in the 19th century. The first grant of arms was made in 1947, and this was not amended in 1967 when additional territory was incorporated into the County Borough of Sunderland.

In 1974, on the creation of the Metropolitan Borough of Sunderland, new arms were granted essentially the old arms with amendments to reflect the new incorporated areas, and in 1992 when Sunderland was created a City an entirely new grant of arms was made, the main charges being quite unlike any previous grant.

Sunderland has used Nil desperandum Auspice Deo as a motto since 1849. It is taken from the Odes of Horace, Book 1, Ode 7, line 27.

Nil desperandum Auspice Deo translation - "When God is on our side there is no cause for despair." or "Do not despair, have faith in God" or "Don’t despair, in God we trust"

||Although the grant of 1974 was made to the Council of the Borough of Sunderland and its successors regardless of their names, elevation to city status in 1992 was celebrated with a new grant of arms, which city officials requested had "not as much white" as previous arms.

For crest: Upon a Helm with a Wreath Or and Azure upon Water barry wavy Azure Argent Azure a Lymphad with oars in action proper each Castle charged with two Crosses of Saint Cuthbert (one manifest) Or a sail of the Arms pennon and flags Gules Mantled Azure doubled Or.

The badge an Estoile Gules charged with a Crown Flory Or the circlet charged with four Saltires couped Gules has five arms to represent the new and tradition industries now in the city.

The motto, Nil desperandum auspice Deo, has traditionally been used by Sunderland.

Sunderland gained city status in the fortieth year of Queen Elizabeth's reign, and each saltire supposedly represents ten years of that reign. However, in the definitive painting, on the letters patent, the each crown has two and two half-saltires visible. Usually this implies another two and two half-saltires on the invisible half of the circlet. When used by the council the crowns have four full saltires visible. Although the traditional sextant, as a reminder of Sunderland's shipping history has been lost, the supporters and crest still retain the reminders of the inland areas of the city.