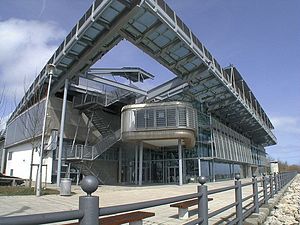 The National Glass Centre is located in Monkwearmouth, on the north banks of the River Wear, on the former site of J.L. Thompson and Sons shipyard. The centre is close to the site of St. Peter's Church, part of the original Monkwearmouth-Jarrow Priory built in 674. It was here that Benedict Biscop introduced glass making into Britain, by hiring French glaziers to make the windows for the priory. The glass-making industry exploded in the eighteenth century, driven by an abundance of cheap coal and high-quality imported sand. Sunderland glass became known throughout the country.[1] In later years, the Pyrex brand of glassware was manufactured in Sunderland. In 2007, the last two remaining glass firms in Sunderland - Corning Glass Works and Arc International (who make Pyrex) - announced they would close.

Despite the decline in the industry, in 1998 the centre was opened for £17 million.[2] It was funded by the Arts Council in conjunction with the University of Sunderland, Tyne and Wear Development Corporation, European Regional Development Fund and Sunderland City Council. The centre, located alongside the university's St. Peter's campus, continued the regeneration of the banks of the Wear. 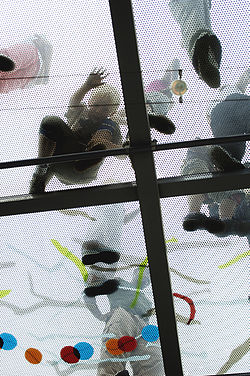 The National Glass Centre roof from below

The National Glass Centre is constructed from glass and steel. It has a glass roof that people can walk around and look down into the centre below. There is a total of 3,250 square metres of glass on the roof, and it can hold 4,600 people on at any one time. Each glass panel on the roof is 6 cm thick.

The centre is a museum dedicated to the history of glass-making, with numerous exhibitions and galleries. Visitors can also watch glass being made in the centre. A number of artists are located on site, and their work can be purchased by visitors in the glass shop.

Since August 2006, National Glass Centre dropped its admission fee and is currently free to visit. Since the drop in admission fee, the centre has seen a rapid increase in visitors. It has also played host to many prestigious events including the 2007 North East Tourism Awards and T4 Transmission with T-Mobile.[3]

Since the centre opened it has failed to meet targets on visitor numbers.[2] Visitor numbers of 100,000 per year were some way short of the target of 250,000 visitors per year.[4][5] The centre receives regular funding from the Arts Council England - including one of £700,000 - prompting a National Audit Office report to judge that it was "over-funded".[2] Despite this, the site continues to receive a quarter of a million pound grant annually by the Arts Council and the City Council[2] and in 2002 was losing £100,000 per year.[4] The problems of low attendance and overly optimistic income generation the Centre experienced have been shared by other lottery funded cultural attractions in the North East such at the Arc Centre in Stockton (which went into liquidation in 2003) and nearby Baltic Centre for Contemporary Art.

The National Glass Centre hosts a variety of changing exhibitions in its Contemporary Gallery. Exhibitions have included: