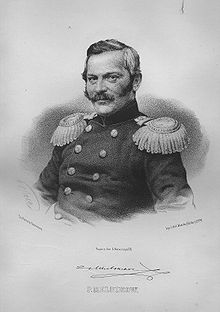 In 1825 Melnikov graduated at the head of his class from the Institute of Transport Engineers in the School for Communication Routes with the rank of Lieutenant in the Corps of Transport Engineers. He remained as a teacher at the Institute, becoming professor of applied mechanics in 1833. He also took part in several construction projects to improve the Russian network of rivers and canals. In 1833 he joined the St. Petersburg Artillery School. he was also responsible for repairing the wooden cupola of the Trinity Cathedral in St Petersburg.[1]. In the Summer of 1839 Melnikov and another colonel, Nikolai Osipovich Kraft (1798-1857), were sent to the United States to inspect its railroad system and recommend technology to be used in Russia. The travellers returned in the fall of 1840. Based on his experience Melnikov suggested to adopt a 5ft wide gauge for the planned Moscow-St. Petersburg Railway (before, only a short line connecting St. Petersburg to Tsarskoe Selo had been built in 1836-37 under František Josef Gerstner). The gauge was approved as the new standard on 12 September 1842.

When construction of the Moscow-St. Petersburg Railway started in 1842 Melnikov was appointed to manage the construction of its northern part. Since 1862 he was the chief manager of the railway, served as the Transport Minister during 1866-69 and as a member of the Railroads Committee in1870-75.

Melnikov also contributed to water transportation systems and other engineering projects. He is the author of the first books about railroad construction ever written in Russian.