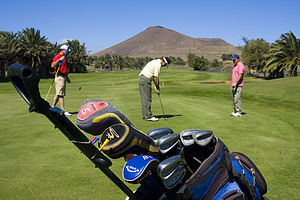 Golf clubs in a golf bag. Background: a player uses a putter to roll the golf ball into the cup

Golf equipment encompasses the various items that are used to play the sport of golf. Types of equipment include the golf ball itself, implements designed for striking the golf ball, devices that aid in the process of playing a stroke, and items that in some way enrich the playing experience. 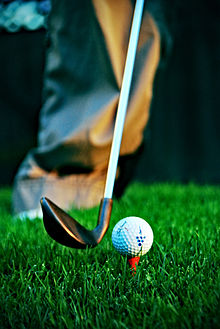 The minimum allowed diameter of a golf ball is 42.67 mm and its mass may not exceed 45.93 g. Modern golf balls have a two-, three-, or four-layer design constructed from various synthetic materials. The surface usually has a pattern of 300-450 dimples designed to improve the ball's aerodynamics. The method of construction and materials used greatly affect the ball's playing characteristics such as distance, trajectory, spin and feel. Harder materials, such as Surlyn, usually result in the ball's traveling longer distances, while softer covers, such as Urethane, tend to generate higher spin, more "feel" and greater stopping potential. Golf balls are separated into three groups depending on their construction: two-, three-, or four-piece covers. Generally four-piece golf balls tend to be the most expensive, though price is no assurance of quality.

A player usually carries several clubs during the game (but no more than fourteen, the limit defined by the rules). There are three major types of clubs, known as woods, irons, and putters. Wedges are irons used to play shorter shots. Woods are played for long shots from the tee or fairway, and occasionally rough, while irons are for precision shots from fairways as well as from the rough. A new type of club called a hybrid combines the straight-hitting characteristics of irons with the easy-to-hit characteristics of higher-lofted woods. A hybrid is often used for long shots from difficult rough. Hybrids are also used by players who have a difficult time getting the ball airborne with long irons. Wedges are played from difficult ground such as sand or the rough and for approach shots to the green. Putters are mostly played on the green, but can also be useful when playing from bunkers or for some approach shots. Putters have minimal loft, forcing the ball to stay on the putting surface when struck.

When on the green, the ball may be picked up to be cleaned or if it is in the way of an opponent's putting line. Its position must first be marked using a ball marker (usually a flat, round piece of plastic or metal, generally a coin).

A tee is an object (wooden or plastic) that is pushed into or placed on the ground to rest a ball on top of for an easier shot; however, this is only allowed for the first stroke (tee shot or drive) of each hole. Conventional golf tees resemble nails with a small cup on the head and are usually made of wood or plastic. Wood tees are generally very inexpensive and quite disposable; a player may damage or break many of these during the course of a round. Plastic tees are generally more expensive and last longer. The length of tees varies according to the club intended to be used and by personal preference; longer tees (3-3.5") allow the player to position the ball higher off the ground while remaining stable when planted, and are generally used for modern woods. They can be planted deeper for use with other clubs but tend to break more often. Shorter tees (1.5-2.5") are suitable for irons and are more easily inserted and less easily broken than long tees.

Alternately, the rules allow for a mound of sand to be used for the same function, also only on the first shot. Before the invention of the wooden spike tee, this was the only accepted method of lifting the ball for the initial shot. This is rarely done in modern times, as a tee is easier to place, hit from, and recover, but some courses prohibit the use of tees either for traditional reasons, or because a swing that hits the tee will drive it into or rip it out of the ground, resulting in damage to the turf of the tee-box. Tees also create litter if discarded incorrectly when broken.

A golfer typically transports golf clubs in a golf bag. Golf bags are usually nylon or leather and are cylindrically constructed around a plastic frame, but historically have been made from other materials such as elephant's penis.[1] Golf bags have several pockets designed for carrying various equipment and supplies required over the course of a round of golf. Golf bags can be carried, pulled on a two-wheel pull cart or harnessed to a motorized golf cart during play. Golf bags have both a hand strap and shoulder strap for carrying, and sometimes have retractable legs that allow the bag to stand upright when at rest. 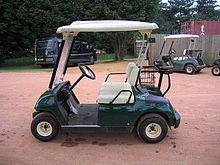 Golf carts are motorized vehicles used to transport golf clubs and/or golfers along the golf course during a round of golf. The traditional way to play was to walk but the use of golf carts is becoming more common.

Most golf bags have a ring to which a player can tie or clip a golf towel, used to wipe hands and clean balls and club faces. Some of these towels can be quite specialized, with a carabiner or other clip to attach it to the bag with a grommet used on the towel for durability, and incorporating rougher materials in certain sections of the towel for club and ball cleaning with softer weaves elsewhere for drying hands and balls. Other cleaning products abound, from motorized ball cleaners to an array of brushes for various types of clubs as well as balls and shoes.

Clubhead covers protect the clubs from striking each other and from weather and incidental damage while in the bag, make clubs more identifiable at a glance, and provide a personal touch to a player's clubs.

A ball mark repair tool (or pitchfork) is used to repair a ball mark (depression in the green where a ball has hit the ground). Some tees contain such a tool at the end, for pure convenience when on the green. To repair a ball mark, one pushes the tool next to the mark and pushes gently inwards from all sides, loosening the compacted turf to allow rapid regrowth of grass, and then flattens the mark with the smooth flat bottom of the putter to smooth the putting surface.

Other tools exist to aid the golfer in various ways.

Golfers also often wear gloves that help grip the club and prevent blistering. Normally only one glove is worn on the non dominant hand. The increased grip and control allows for harder swings to be made with more control, increasing distance.

Many golfers wear special shoes with spikes attached to the soles. These can be made of metal or plastic (plastic spikes are also known as "soft spikes") designed to increase traction thus helping the player to keep his/her balance during the swing, on greens, or in wet conditions. In an attempt to minimize the severity of spike marks made on greens, many golf courses have banned metal spikes, allowing only plastic spikes during play.