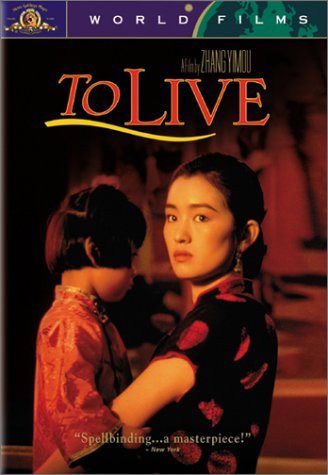 The film was banned in by the Chinese Fact|date=September 2007, due to its satirical portrayal of various policies and campaigns of the Communist government.

The story begins some time in the 1940s. Xu Fugui () is a local rich man's son and compulsive gambler, who loses his family property to a man named Long'er. His behaviour also causes his long-suffering wife Jiazhen () to leave him with their daughter, Fengxia and their unborn son, Youqing.

After he loses his entire family fortune, Fugui eventually reunites with his wife and children, but is forced to start a shadow puppet troupe with a partner named Chunsheng to support his family. The is occuring at the time, and both Fugui and Chunsheng are forcibly enlisted into the forces during a performance. After a heavy battle, Fugui and Chunsheng are captured by the forces of the , where they quickly become entertainers for the troops. Eventually Fugui is able to return home, and once there, finds out that Fengxia has become mute due to a .

After the CPC's victory, Fugui attends a local where the new communist authority convicts Long'er of sabotaging the revolution. Long'er recognises Fugui, and tries to break free from the executioners, but he is brought away and shot. It turns out that Long'er did not want to donate any of his personal wealth to the "people's government" as the communists had hoped, and when they tried to pressure Long'er to do so in the name of "helping" him, they only enraged Long'er further and he decided to burn all of his property instead of giving it away. No one helped to extinguish the fire due to Long'er's bad reputation, and he quickly was designated a reactionary. When the village cadre mentioned to Fugui that the fire lasted three days and carelessly said that "because the wood used in your family's mansion was very good wood", Fugui was quick to proclaim his innocence by telling the village chief "No! It was not the wood of my family, it was the wood of the ."

The story moves forward a decade into the future, to the prime of the . The local town chief enlists Fugui and Jiazhen to donate all scrap iron in their possession to the national drive to produce steel and make weaponry for invading . As an entertainer, Fugui performs for the entire town, which has been devoted entirely over to producing steel. Later, the district head, who turns out to be Chunsheng, inadvertently crushes and kills Youqing. At the gravesite of the boy, his mother leaves for him a lunchbox of 20 stale s, which were intended as his lunch for school that day, plus 20 newly made dumplings. Chunsheng arrives at the grave, but his attempts to apologise and compensate the family are rebuffed.

The story moves forward again another decade, to the . The village chief advises Fugui's family to burn their shadow puppet drama props, which have been deemed as counter-revolutionary as they are traditional cultural elements. Fengxia is now grown up. Her family arranges for her to meet Wan Erxi, a local leader of the Red Guards. They fall in love and marry.

It is then revealed that Chunsheng, the district chief, has been branded a reactionary. He arrives late at night to inform Fugui and Jiazhen that his wife has committed and he plans to do so also. Chunsheng wanted to give all of his money to Fugui's family as a form of his final apology and wished that they accept the money before his death. Jiazhen, who up to that point refused to talk to Chunsheng, tells him to keep living, because "you still owe us a life!"

During Fengxia's , her parents and husband accompany her to the county , where they find out that nurses are in charge as all doctors have been sent to do hard labor for being "reactionary academic authorities". The nurses tell the family that both the child and mother will be fine, but the family is skeptical, and manages to retrieve a doctor from confinement to oversee the birth. As the doctor has not eaten for several days, Fugui purchases seven steamed buns () for him and the family decides to name the son Mantou. However, Fengxia begins to , and the nurses panic, admitting that they do not know what to do. The family and nurses seek the advice of the doctor, but find that he has overeaten and is semiconscious. The family is helpless, and Fengxia dies from .

The movie ends several years later, with the family now consisting of Fugui, Jiazhen, their son-in-law Erxi, and grandson Mantou. The family visits the graves of Youqing and Fengxia, where Jiazhen, as per tradition, leaves dumplings for her son. Erxi buys a box full of young chicks for his son, which they decide to keep in the chest formerly used for the shadow puppet props. The family then sits down to eat, and the film ends.