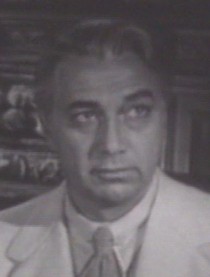 Luther Adler (, - , ) was an American best known for his work in , but who also worked in and . He also directed plays on Broadway.

Born Lutha Adler in , Adler was one of six children born to Russian Jewish actors Sara and . His siblings also worked in theatre; his sister achieved fame as an actress and drama teacher.

Adler made his first acting appearance on Broadway in 1921 and appeared in several productions before joining The Group Theatre in 1931. He played opposite in "" (1933), his sister Stella in "" (1934), "" and "" (both 1935), and in "Golden Boy" (1937). He also appeared in the anti-war musical "Johnny Johnson" (1936). By the early 1940s he was also directing but his first production "" closed after only eleven performances in 1942. His next directorial venture, "", ran for 120 performances in 1946 and featured newcomer in one of the major roles. In 1965, when left the Broadway cast of "" during a contract dispute, Adler took over the role of Tevye. The glowing reviews Adler received may have hastened Mostel's return to the "Fiddler" cast.

Adler was married to actress from 1938 until 1947, and father of Sidney's only child, her son Jacob, who predeceased her.

He died in , and was buried in Mount Carmel Cemetery, , next to several of his relatives, including his older sister Stella.