In concurrent programming, a monitor is an object or module intended to be used safely by more than one thread. The defining characteristic of a monitor is that its methods are executed with mutual exclusion. That is, at each point in time, at most one thread may be executing any of its methods. This mutual exclusion greatly simplifies reasoning about the implementation of monitors compared to reasoning about parallel code that updates a data structure.

Monitors were invented by C. A. R. Hoare [1] and Per Brinch Hansen, [2] and were first implemented in Brinch Hansen's Concurrent Pascal language.

As a simple example, consider a monitor for performing transactions on a bank account.

Upon calling one of the methods, a thread must wait until no other thread is executing any of the monitor's methods before starting execution of its method. Note that without this mutual exclusion, in the present example, two threads could cause money to be lost or gained for no reason. For example two threads withdrawing 1000 from the account could both return true, while causing the balance to drop by only 1000, as follows: first, both threads fetch the current balance, find it greater than 1000, and subtract 1000 from it; then, both threads store the balance and return.

In a simple implementation, mutual exclusion can be implemented by the compiler equipping each monitor object with a private lock, often in the form of a semaphore. This lock, which is initially unlocked, is locked at the start of each public method, and is unlocked at each return from each public method.

For many applications, mutual exclusion is not enough. Threads attempting an operation may need to wait until some condition P holds true. A busy waiting loop

will not work, as mutual exclusion will prevent any other thread from entering the monitor to make the condition true.

Thus there are two main operations on condition variables:

As an example, consider a monitor that implements a semaphore. There are methods to increment (V) and to decrement (P) a private integer s. However, the integer must never be decremented below 0; thus a thread that tries to decrement must wait until the integer is positive. We use a condition variable sIsPositive with an associated assertion of PsIsPositive = (s > 0).

When a signal happens on a condition variable that at least one other thread is waiting on, there are at least two threads that could then occupy the monitor: the thread that signals and any one of the threads that is waiting. In order that at most one thread occupies the monitor at each time, a choice must be made. Two schools of thought exist on how best to resolve this choice. This leads to two kinds of condition variables which will be examined next: 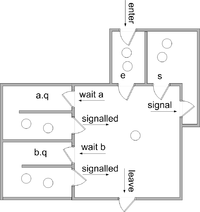 A Hoare style monitor with two condition variables a and b. After Buhr et al.

In addition we assume that for each condition variable c, there is a queue

All queues are typically guaranteed to be fair (in all futures, each thread that enters the queue will be chosen infinitely often[citation needed]) and, in some implementations, may be guaranteed to be first in first out.

The schedule routine selects the next thread to occupy the monitor or, in the absence of any candidate threads, unlocks the monitor.

The resulting signaling discipline is known a "signal and urgent wait," as the signaler must wait, but is given priority over threads on the entrance queue. An alternative is "signal and wait," in which there is no s queue and signaler waits on the e queue instead.

Some implementations provide a signal and return operation that combines signaling with returning from a procedure.

In either case ("signal and urgent wait" or "signal and wait"), when a condition variable is signaled and there is at least one thread on waiting on the condition variable, the signaling thread hands occupancy over to the signaled thread seamlessly, so that no other thread can gain occupancy in between. If Pc is true at the start of each signal c operation, it will be true at the end of each wait c operation. This is summarized by the following contracts. In these contracts, I is the monitor's invariant.

In these contracts, it is assumed that I and Pc do not depend on the contents or lengths of any queues.

(When the condition variable can be queried as to the number of threads waiting on its queue, more sophisticated contracts can be given. For example, a useful pair of contracts, allowing occupancy to be passed without establishing the invariant, is

It is important to note here that the assertion Pc is entirely up to the programmer; he or she simply needs to be consistent about what it is.

We conclude this section with an example of a blocking monitor that implements a bounded, thread safe stack. 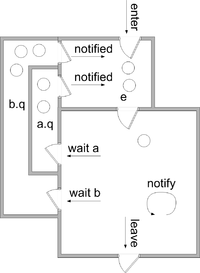 A Mesa style monitor with two condition variables a and b

The meaning of various operations are given here. (We assume that each operation runs in mutual exclusion to the others; thus restarted threads do not begin executing until the operation is complete.)

As a variation on this scheme, the notified thread may be moved to a queue called w, which has priority over e. See Howard[5] and Buhr et al.[6] for further discussion.

It is possible to associate an assertion Pc with each condition variable c such that Pc is sure to be true upon return from wait c. However, one must ensure that Pc is preserved from the time the notifying thread gives up occupancy until the notified thread is selected to re-enter the monitor. Between these times there could be activity by other occupants. Thus it is common for Pc to simply be true.

For this reason, it is usually necessary to enclose each wait operation in a loop like this

where P is some condition stronger than Pc. The operations notify c and notify all c are treated as "hints" that P may be true for some waiting thread. Every iteration of such a loop past the first represents a lost notification; thus with nonblocking monitors, one must be careful to ensure that too many notifications can not be lost.

In this example, the condition being waited for is a function of the amount to be withdrawn, so it is impossible for a depositing thread to know that it made such a condition true. It makes sense in this case to allow each waiting thread into the monitor (one at a time) to check if its assertion is true. 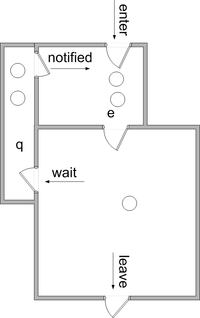 In the Java language, each object may be used as a monitor. (However, methods that require mutual exclusion must be explicitly marked as synchronized.) Rather than having explicit condition variables, each monitor (i.e. object) is equipped with a single wait queue, in addition to its entrance queue. All waiting is done on this single wait queue and all notify and notify all operations apply to this queue.

This approach has also been adopted in other languages such as C#.

Another approach to signaling is to omit the signal operation. Whenever a thread leaves the monitor (by returning or waiting) the assertions of all waiting threads are evaluated until one is found to be true. In such a system, condition variables are not needed, but the assertions must be explicitly coded. The contract for wait is

C. A. R. Hoare and Per Brinch Hansen developed the idea of monitors around 1972, based on earlier ideas of their own and of E. W. Dijkstra. [7] Brinch Hansen was the first to implement monitors. Hoare developed the theoretical framework and demonstrated their equivalence to semaphores.

Monitors were soon used to structure inter-process communication in the Solo operating system.

Programming languages that have supported monitors include

A number of libraries have been written that allow monitors to be constructed in languages that do not support them natively. When library calls are used, it is up to the programmer to explicitly mark the start and end of code executed with mutual exclusion. PThreads is one such library.