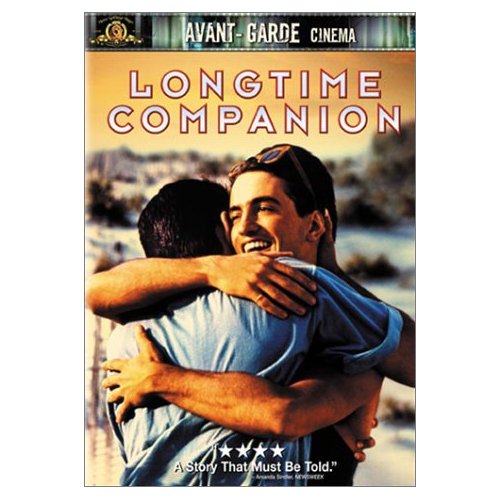 "Longtime Companion" chronicles the first years of the AIDS epidemic as seen through its impact on several gay men and the straight female best friend of one of them. The film is split into several sections identified by dates.

Willy (Scott) a , and his friend John (Mulroney) are spending time with affluent gay couple David (Davison) and Sean () at their beach house on Fire Island for the . Sean is a for the popular daytime "Other People" and David comes from a background and has a large . Back in the city, Howard (Patrick Cassidy) is preparing to audition for Sean's soap. His boyfriend is Paul () and their next-door neighbor is Lisa (Parker), who is also friends with Fuzzy (Stephen Caffrey), a lawyer who represents Howard.

That morning, The New York Times publishes its first article about the rise of a new "gay cancer." The news spreads as friends call each other. Some are immediately concerned, others dismissive. Willy meets Fuzzy at a later in the afternoon and they begin a relationship. Howard lands the role.

John is the first among the group to be diagnosed with the new disease, contracting pneumonia. Howard is given script pages in which his character is slated to become the first openly gay character on daytime television. He's very concerned about , fearing that by playing gay he won't be offered other sorts of parts. Willy and Fuzzy move in together.

John dies shortly after his admission to the hospital.

Willy, Fuzzy, Lisa, David and Sean gather back on Fire Island with friends Michael and Bob to watch Howard's character come out on the soap opera. The group also discuss a sick neighbor who has become a on the island. That evening, Sean and David argue over Sean's fears that he's going to get sick.

Paul is hospitalized with . Sean is also hospitalized. Willy visits Sean and is so terrified of becoming infected that he dons a surgical mask and protective gown and, when Sean kisses him on the neck, excuses himself to the bathroom to scrub the spot. Michael is also visiting Sean, bringing with him homeopathic remedies and a book by . Howard visits Paul and breaks down sobbing.

Sean has deteriorated. David is helping with his writing and deceiving the studio into thinking that Sean is still able to work. Fuzzy tries to get Howard a movie role but the producer refuses to cast him because of the rumor that he has AIDS. (The same rumor lead to him being fired from the soap he was on as well.) Paul is back in the hospital following a seizure. David takes Sean for a walk but has to take him home when Sean urinates in a fountain. That night Willy catches Fuzzy checking himself for swollen glands and they talk about their fear of dying. "What do you think happens when we die?" Fuzzy asks. "We get to have sex again" is Willy's reply.

Sean has deteriorated to the point of near-catatonia and is in constant pain. He has to be strapped into his bed and has lost control of his bowels and bladder and has to wear as a result. After sending Sean's nurse on an errand, David sits with Sean and tells him that it's all right to let go, to stop fighting to stay alive. Sean dies. Willy and Lisa come by to help David and they pick out a suit for Sean to wear to be cremated. Fuzzy calls to find a funeral home. In a rare moment of levity, Lisa and Willy stumble across a slinky red dress in Sean's closet and consider giving it to the undertaker. "What could they say", asks Willy, "if we said we knew him and we knew that's the way he wanted to be remembered?" Ultimately they decide against it, since "it needs a hat."

The four go to a Chinese restaurant to write Sean's obituary and include David as his "longtime companion."

David has died and this is the day of his memorial service. Bob and Willy eulogize him.

Fuzzy and Lisa are volunteering answering phones at GMHC. Willy is a "buddy" to a GMHC client, Alberto.

Howard has been diagnosed as being . Although it's not mentioned, the presumption is that Paul has died. Howard exploits his remaining fame as a former soap opera star to raise money for AIDS causes by hosting a benefit which includes a performance of the song YMCA performed in a pastiche of classical style.

Willy, Fuzzy and Lisa walk along the beach. While it is again unstated, the presumption is that Howard has died. They talk about an upcoming ACT UP demonstration. They talk about remembering a time before AIDS and wonder about finding a cure. The film ends with a momentary fantasy sequence, with the friends and others lost to AIDS appearing with them on the beach, before they vanish again and the three are left to walk off the deserted beach while the song "Post-Mortem Bar", by Zane Campbell, plays on the soundtrack.

The film was criticised by some at the time for focusing almost exclusively on white gay men. Only one character with AIDS, Alberto, is a person of color, and he appears only momentarily.

"Longtime Companion" garnered a number of awards and honors, many for the performance of . Davison remains one of only a few people to receive an Academy Award nomination for playing an openly gay character. In addition to his Oscar nomination, Davison won a award, an , a award, and a award for Best Supporting Actor. Other awards and nominations include: