It was first based at Fontainebleau (France), and originally activated in April 1951. It reported to Allied Forces Central Europe (AFCENT), which in turn reported to Allied Command Europe, headquartered at Supreme Headquarters Allied Powers Europe in Belgium. The post of Commander was replaced by Deputy C in C, HQ Allied Forces Central Europe on 1 Mar 1967.[1]

The Headquarters was re-established on 28 June 1974 at Ramstein Air Base, Germany as a principal subordinate command under Allied Forces Central Europe (AFCENT).[2] Ramstein Air Base is located in the German state of Rheinland-Pfalz. Its task was to provide central direction and control for the NATO air forces in the European Central Region through the co-ordination of the two existing headquarters, Second Allied Tactical Air Force (2ATAF), based at Rheindahlen, which covered the northern part of the region, and Fourth Allied Tactical Air Force (4ATAF), based at Heidelberg, which was responsible for the southern area.

2nd ATAF, formed in 1958, directed NATO air units in the Netherlands, Belgium, and the northern part of Germany in support of Northern Army Group. The post of Commander was invested in C in C, RAF Germany. 2 ATAF was disbanded on 30 June 1993, and its role taken over by AIRCENT the next day. While the peacetime headquarters was always at Rheindahlen near Monchengladbach, the war base was just over the border in the Netherlands, at what Warplane, published by Orbis Publishing in 1985, called a 'classified location' (JOC Maastricht; also PWHQ 2ATAF & NORTHAG till it was moved to "Castle Gate").

In Belgium today there are two airbases where airplanes assigned to NATO are stationed. One is Florennes Airbase, the other one is Kleine Brogel Air Base. Kleine-Brogel is a base where F-16s with a nuclear capacity are based. Melsbroek (co-located with the national airport Zaventem) is home to the 15th Air Transport Wing operating C-130's and a fleet of civilian jets.

In the Netherlands the Soesterberg Air Base, used by the USAFE, was closed after the Cold War, and the 298 and 300 Squadron are to be moved to Gilze-Rijen Air Base. The Leeuwarden Air Base is the home of the annual NATO exercise "Frisian Flag".

The 4th ATAF, which had been headquartered at Ramstein for many years, included the 1st Canadian Air Group, 1st and 2nd Divisions of Germany's Luftwaffe, and units of the USAFE's Third and Seventeenth Air Force.

United States Air Forces in Europe (USAFE) aircraft and personnel assigned to AAFCE have been located at bases including Ramstein, Sembach, and Spangdahlem. Sembach Air Base, used by the 601st Tactical Control Wing during the Cold War, was returned to German control and became an annex of Ramstein Air Base in 1995. USAFE also maintains another base in Germany at Spangdahlem. The 52d Fighter Wing there maintains, deploys and employs F-16C and A/OA-10 aircraft and TPS-75 radar systems in support of NATO and national defence directives.

Headquarters Allied Air Forces Central Europe (AAFCEwas established on 28 June 1974 at Ramstein Air Base, as a principal subordinate command under Allied Forces Central Europe (AFCENT). Its task was to provide central direction and control for the air forces in the European Central Region through the co-ordination of the two existing headquarters, Second Allied Tactical Air Force (2ATAF), based at Rheindahlen, which covered the northern part of the region, and Fourth Allied Tactical Air Force (4ATAF), based at Heidelberg, which was responsible for the southern area.

During the early 1990s, following the relaxation of the tensions between East and West, a major reorganisation of the NATO command and control structure was planned. As part of this, and to take account of the decrease in the number of allied aircraft in Europe, a rationalisation of the Central Region air force headquarters occurred during 1993 with the closing of 2ATAF and 4ATAF and the expansion of AAFCE to meet the new increased task as it absorbed functions previously undertaken by the ATAFs.

This change in structure was marked by a ceremony at Ramstein on 1 July 1993, when the headquarters was officially formed and renamed AIRCENT. A further consequence of the NATO reorganisation was an increase in the area of responsibility for Allied Forces Central Europe by the addition, on 1 January 1994, of Denmark and the northern parts of Germany, both of which were previously under AFNORTH command. As a result, Denmark joined the six nations, which staffed the headquarters since its inception: Belgium, Canada, Germany, the Netherlands, the United Kingdom and the United States. 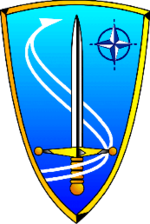 With the accession of three new members, Hungary, Poland, and the Czech Republic in March 1999, Poland and the Czech Republic became part of the Central Region and have since then contributed to AIRCENT’s task and mission. On 1 September 99, HQ AIRCENT implemented the future HQ AIRNORTH structure, including now personnel from Norway, Hungary, Poland, the Czech Republic, Italy and Spain. On 3 March 2000, HQ AIRNORTH was set up by amalgamation of the former HQ AIRNORTHWEST (High Wycombe, UK) and HQ AIRCENT, and by transfer of the air responsibilities of HQ BALTAP which became JHQ NORTHEAST (Karup/DA), and HQ NORTH which became JHQ NORTH (Stavanger/NO). With the accession of seven new members (Bulgaria, Estonia, Latvia, Lithuania, Romania, Slovenia, Slovakia) in March 2004, the Baltic States Estonia, Latvia and Lithuania as well as Slovakia became a part of the Region North, On 1 July 2004, HQ AIRNORTH was renamed Component Command-Air Headquarters Ramstein and a new internal HQ-structure was implemented.

With effect of 1 March 2010 the Headquarters was renamed to Headquarters Allied Air Command Ramstein (HQ AC Ramstein) The Commander at HQ AC Ramstein is a United States Air Force General, currently General Mark A. Welsh, who also serves in the U.S. national appointment of Commander United States Air Forces Europe. He is the designated Commander Allied Air Command for Joint Force Command Brunssum, the Air Advisor to COM JFC Brunssum, the Regional Air Commander (RAC), the Regional Air Defence Commander (RADC) and the Regional Airspace Control Authority (RACA). Air-Com Ramstein has a multinational staff, which may include liaison elements from other NATO headquarters and national commands as specified in agreements. The Deputy Air Commander is ordinarily a German or a British 3-star, now appointed by rotation. The current Deputy Commander, Allied Air Command Ramstein, is Lieutenant General Friedrich-Wilhelm Ploeger, who assumed that post first of July 2010. Recent exercises that the Command has been involved in have included Exercise BOLD AVENGER 2007, when took place from 3–14 September 2007 at Ørland Main Air Station, Norway, Exercise COOPERATIVE ARCHER 2007, held from 9–20 July 2007 in Tbilisi, Georgia, Exercise ALLIED REACH 2007, held at the Ramstein headquarters, and Loyal Arrow 2009 in Sweden. On a regular base Baltic Region Training Events (BRTE) are held designed to offer training opportunities for enhancing interoperability, building capabilities and continuing the integration of Estonia, Latvia and Lithuania. Baltic Region Training Event BRTE V