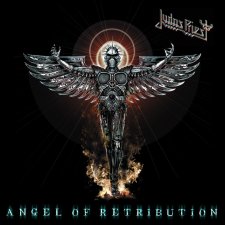 "Angel of Retribution" is the 15th by British band , released in 2005. It marks the return of , after a 12 year departure from the band. The album debuted at #13 on the U.S. Billboard chart, what makes it the second highest chart of a Judas Priest album (only before "Nostradamus"). It also marked the first time Judas Priest have been the number 1 artist on a national chart (in ). The album was produced by , who co-penned "Deal With The Devil".

Within the lyrics of the album, several references to past albums and songs are to found, as a way of showing that Priest has not forgotten where they came from. The song "Demonizer" references both "The Hellion" from "" as well as "Painkiller" from the eponymous album. "Hellrider" mentions both "Ram it Down" off the same-titled album, and "Tyrant" from "". "Eulogy" references "Stained Class" and "The Sentinel" from the albums "Stained Class" and "Defenders of the Faith", respectively. The song "Deal With the Devil" can be viewed as a biography of Judas Priest, telling their origins from the of England's West Midlands, mentioning their transitory days gigging around England and practicing at the Church of Holy Joseph in Walsall, which is where Judas Priest was effectively born.