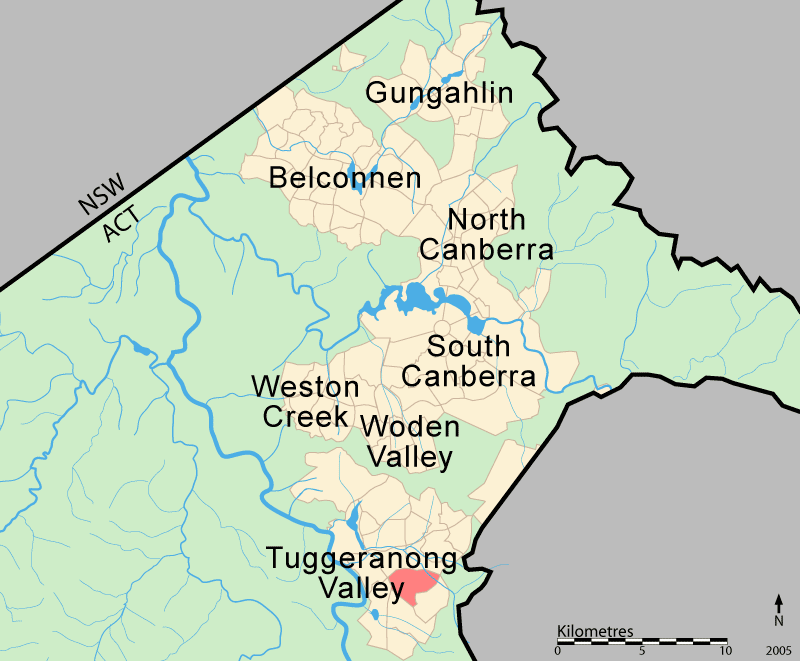 Calwell is a medium sized suburb in the . is on its southern border and it adjoins the suburbs of Theodore to the south, Richardson and to the north. The is to the north. On the eastern border is the taking commuters to the Canberra city centre and from Canberra to Cooma.

The suburb was named after the Labor politician, the Right Honourable Arthur Augustus Calwell, PC, (1896-1973). The name was gazetted 5 August 1975.

Streets in the suburb are named in accordance with the theme of Victorian politicians.

The Calwell Centre is a designated group centre located on Webber Crescent in the north of the suburb. The centre was developed in the early 1990s to serve Calwell, Richardson, Theodore and Isabella Plains. Prior to the development of the in the late 1990s, the Calwell Centre also serviced Conder, Banks, and Gordon, . Among the retail and service outlets are a Woolworths supermarket, service station, , Chinese and several other businesses. [ACTPLA (2002) [http://www.actpla.act.gov.au/tplan/variatio/dv158/finalv158.pdf Recommended Final Group Centres Feb 02.doc] , retrieved 30 August 2006 ] [ACTPLA (2006) [http://www.actpla.act.gov.au/tplan/variatio/dv158/tuggc.htm ACT GROUP CENTRES - CHARACTERISTICS OF OUTLETS] , retrieved 30 August 2006 ] . The [http://www.eastlakefc.com.au/cc/ Calwell Club] opened in 2004 and is located adjacent to the centre.

* [http://www.sfa.cg.catholic.edu.au/ St Francis of Assisi Primary School] , located on Casey Crescent, is a Catholic school that began operating from Holy Family School, Gowrie in 1988 and caters for students in Kindergarten to Year 6.

[http://smiv.org/index.html St Mary in the Valley Anglican Parish Centre] is located on the corner of Were Street and Webber Crescent; in addition to Church services the Parish also manages the Calwell Community Centre. [http://www.alliancechurch.org.au/ Alliance Church Tuggeranong] is also located on Were Street. Corpus Christi Catholic Parish, based in Gowrie, runs services in the hall at St Francis of Assisi Primary School.

Deakin Volcanics green grey and purple of age form the base rock of Calwell. [Henderson G A M and Matveev G, Geology of Canberra, Queanbeyan and Environs 1:50000 1980.]