In 1574, he produced a popular version of the Martín Cortés de Albacar's Arte de Navegar, entitled A Regiment for the Sea. Bourne was critical of some aspects of the original and produced a manual of more practical use to the seaman. He described how to make observations of the sun and stars, using a cross-staff, and how to plot coastal features from the ship by taking bearings using triangulation.[1] 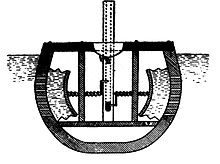 Submarine by William Bourne, in Inventions or devices, 1578.

His design, detailed in his book Inventions and Devises published in 1578, was one of the first recorded plan for an underwater navigation vehicle. He designed an enclosed craft capable of submerging by decreasing the overall volume (rather than flooding chambers as in modern submarines), and being rowed underwater. Bourne described a ship with a wooden frame covered in waterproofed leather, but the description was a general principle rather than a detailed plan. However, Bourne's concept of an underwater rowing boat was put into action by the Dutchman Cornelius Drebbel in 1620, and Nathaniel Symons demonstrated a 'sinking boat' in 1729 using the expanding and contracting volume of the boat to submerge.

The submarine was the subject of a modern-day recreation on season 3 of "The Re-Inventors" TV show, episode "Bourne Submarine". The recreation had limited functionality before it sank when water pressure ruptured some membranes on a test descent.[2]