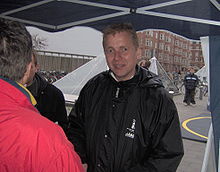 Martin Geertsen, born 1970 i Nykøbing Falster, Denmark, is a former mayor of culture in Copenhagen and former political leader of the Venstre party in Copenhagen.[1]

Martin Geertsen has been a member of Venstre, including its youth arm VU since 1987, and was the leader of the Falster branch of VU from 1989 to 1990,[2] when he graduated from high school at Nykøbing Katedralskole. He started studying political science at the University of Copenhagen in 1991, from which he got his degree of BA.[2] From 1993 to 1994 he was the leader of the Copenhagen branch of VU, from 1994 to 1996 he was a member of the national assembly of VU, and from 1995 to 1996 he was vice president of the Danish national VU.

In 1998 he has been part of the city council of Copenhagen, and has been mayor of culture since 2002.[2] He refused to take over work in Folketinget (the Danish parliament) in 2006 for Jens Rohde due to his position of leading the Venstre party in Copenhagen, with the prospect of becoming the first Lord Mayor of Copenhagen ever not to belong to the Social Democratic Party.[3]