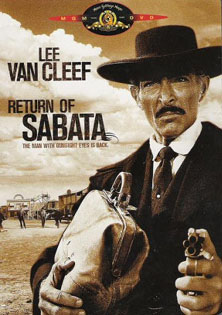 "Return of Sabata" (Italian: "È tornato Sabata ... hai chiuso un'altra volta", or roughly translated as "Sabata is back ... to end another time") is a 1971 film directed by . The third film in "", it features the return of as the title character, which he had played in the first film, "Sabata", but was replaced by in the second film, "", due to a scheduling conflict.

Sabata, a former Confederate army officer and steely eyed, quick-drawing impossibly accurate gunman with a trick gun is working for a travelling circus as a stunt marksman. The circus comes to a small town, where a former subordinate officer, a lieutenant from the army is running a crooked casino. The man owes Sabata $5,000 from sometime ago. Then the circus manager runs off with the circus funds, so Sabata decides to stay in town and try to collect on the debt from his friend. Sabata then runs into conflict with the town's land baron, McIntock, who imposes high taxes on gambling, drinking and prostitution with the supposed idea of building the town up, using the money. Sabata who is after the money himself finds out that the townspeople's money in McIntock's safe is counterfeit and that he and the priest have hidden it elsewhere, in the form of gold coins. After a few attempts on his life and lots of badmen dying under his guns, Sabata and the lieutenant are apparently killed so McIntock goes for the money only to find them both still alive. Sabata is helped throughout by his friends; the acrobat, his partner and a fat, pompous man who is anything but what he seems.