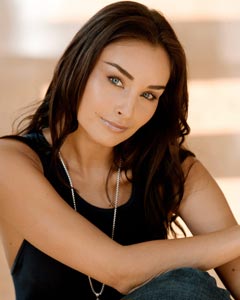 Vienna Hyatt is a character on the American soap opera "As The World Turns". She has been played by from , to , and currently since , .

Originally the character of Vienna was written as a parody of ; indeed, the name "Vienna Hyatt" is a formula of a European capital and a high-end hotel chain, much like Hilton's name is perceived.

Vienna began as a superficial socialite who dated wealthy men who could shower her with jewels and a lavish lifestyle. She lacks any modesty and believes that no man can resist her, and she is often (though not always) right about this. She was in love with jewel thief Simon Frasier but when things didn't work out with him, she became involved with a Prince who inexplicably gifted her with some exquisite crown jewels. Simon and Carly plotted together to steal the jewels from her neck, replacing them with a fake that was supposed to be indistinguishable from the real thing. Carly distracted the prince, while Simon seduced Vienna and made the switch.

Vienna set the investigation into the jewel heist in motion when, angry that she had been used and that Simon chose Carly over her, she began making hints and accusations hoping to blackmail Simon into coming back to her. Katie, who was also bitter because Simon had chosen Carly over her and in full panic because her marriage to Mike was falling apart, also played a part in pushing the investigation forward.

Vienna ended up splitting from the Prince because he was suspicious that she had played a part in either the theft of the necklace, or in aiding and abetting Simon after the fact. She had in fact helped Simon escape in the end, although she had nothing to do with the original plot to steal the jewels. Still, afraid of losing everything, she transferred all of her own considerable assets to trusted friend Henry Coleman.

Henry and Vienna began a whirlwind romance. Vienna quickly fell madly in love with Henry, but Henry seemed a bit more reserved, although he certainly found Vienna beautiful, desirable and charming, he never actually claimed to love her. She pushed him into an engagement and marriage that he wasn't ready for which culminated in him leaving her at the altar. Later they were able to reconcile and decided that although they were not ready for marriage, they did want to be together as a couple.

Vienna felt it would be fun to have a job like regular people. She originally wanted to open a massage spa, despite the fact that her massages where painful, a fact no one wanted to admit to her.

Vienna invested in a piece of real estate (definitely a risky venture in Oakdale) for her spa and ended up losing everything. Henry tried to raise some funds through his favorite vice, gambling, and ended up winning Al's Diner in a card game.

Henry and Vienna had difficulty running the diner, especially since Vienna hated the uniforms and was disgusted by the unhealthy food being served there. She wanted to transform it into a Swedish eatery. Henry got a buy back offer from a nephew of Al's, but Vienna insisted they keep the diner.

Vienna seems obsessed with a particular Swedish delicacy called Pepparkakor which is a spiced cookie similar to gingersnaps or gingerbread.