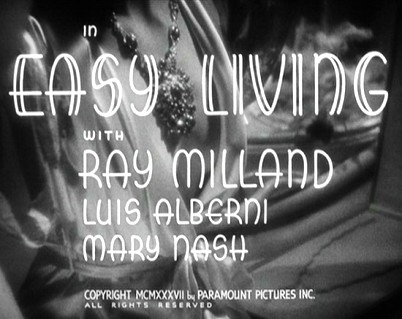 "Easy Living" (fy|1937) is a , directed by , written by from a story by , and starring , Edward Arnold, and . Many of the supporting players (, , , Robert Greig, , and ) became a major part of Sturges' regular stock company of character actors in his subsequent films.

and composed the song "Easy Living" for the film, and it has since become a standard, made famous by , Ella Fitzgerald and many other jazz singers. [cite web|url= http://www.jazzstandards.com/compositions-0/easyliving.htm|date= c. 2005|accessdate= 2008-01-27| title= "Easy Living"|work= JazzStandards.com]

The fy|1949 film "Easy Living" starring is not related.

J.B. Ball (), the third richest banker in America, becomes infuriated after learning that his wife Jenny () had bought a $58,000 fur coat without his knowledge. He throws it off his . It lands on Mary Smith () while she is riding to work on a . When she tries to return it, he tells her to keep it (without informing her how valuable it is). He also buys her an expensive new hat to replace the one damaged in the incident, causing her to be mistaken for his mistress. When she shows up for work, her straitlaced boss suspects her of behaving improperly to get a coat she obviously cannot afford and fires her to protect the reputation of the "Boy's Constant Companion", the magazine he publishes.

Mary begins receiving offers from people eager to cash in on her notoriety. One firm gives her an expensive sixteen-cylinder car, and hotel owner Mr. Louis Louis () installs her in a luxury suite, hoping that this will deter Ball from foreclosing on his failing establishment.

When Mary goes to an for a meal, she meets John Ball Jr. (), J.B.'s son. He is determined to make it on his own and is working anonymously at the restaurant. However, he is fired for giving Mary free food. When Mary finds out he has no place to stay, she invites him to share her enormous suite while he looks for a new job. They quickly fall in love. Meanwhile, as time goes on, her supposed connection to J.B has satirically disastrous consequences for the . E.F. Hulgar (Andrew Tombes) asks her for inside information about steel from Mr. Ball. The only Ball the confused Mary knows is John Jr., so she queries him. He jokingly tells her it is going down and she passes it along to Hulgar. As a result, everybody begins selling, just as J.B. starts buying, causing J.B.'s company to totter on the brink of . When Mary, John, and J.B. finally get together and figure out what is going on, John comes up with a bright solution - getting Mary to tell Hulgar that J.B. has cornered the market. Prices shoot up, rescuing the beleaguered financier.

The delighted father gives his son a job. John then offers Mary a job too: fixing his breakfast every day as his wife.

Preston Sturges had signed a deal with Paramount in fy|1936, and "Easy Living" was his first assignment for them.

Preston based the Hotel Louis on New York's Waldorf Towers, which was a financial flop when it first opened.

was to have been in the cast of "Easy Living", but was forced to withdraw due to illness. The minor surgery of director Leisen caused production to be postponed a week to fy|1937.

Leisen said that Ray Milland got stuck in the tub while shooting the bathtub scene, and although the incident wasn't in the script, Leisen kept the camera rolling and inserted the bit into the film. In the love scene on the divan between Milland and Arthur, the two actors lay on the divan in opposite directions with their heads meeting in the middle. They had no physical contact except a kiss. Such contortions were necessary to satisfy the requirements of the . The phone gag with Esther Dale as the secretary was based on the behavior of Leisen's secretary, who gets the phones on her desk mixed up.

Under the belief that an actress needs to be satisfied with the way she will look in order to devote all her attention to her acting, Leisen personally directed all of Arthur's wardrobe and hair tests, and went so far as to style her hair himself. (Leisen had come to directing from the world of costume design and art direction.) [imdb name|0500552|Mitchell Leisen] Leisen's pains paid off &ndash; the shy and nervous Jean Arthur had a reputation for being difficult, but the director had no trouble with her on "Easy Living", which was all the more surpising since Arthur was in the middle of a bitter dispute with ' : dissatisfied with the films Columbia was putting her in, she wanted out of her contract. (Arthur was contractually able to do two outside pictures a year, which is why she could do "Easy Living" for Paramount.) It has been reported in the biography of Jean Arthur and elswhere that the jewels and furs Arthur wore in the film were genuine, and that guards were posted during the filming because of their value.

A legal dispute between and Paramount over the source for the film threatened to hold up its release. Fox asserted that the film was based on a Hungarian play called "Der Komet" by Attila Orbok, which they owned and had used as the basis for "" (fy|1933) and were planning to use as the basis for an upcoming film, "". Fox eventually backed off their claim of infringement, and "Easy Living" was released as scheduled on fy|1937.