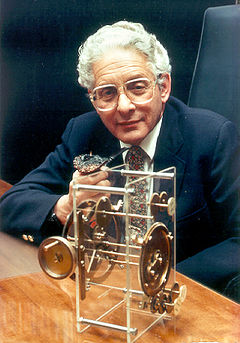 Derek John de Solla Price (22 January 1922 – 3 September 1983) was a physicist, historian of science, and information scientist, credited as the father of scientometrics.

Price was born in Leyton, England, to Philip Price, a tailor, and Fanny de Solla, a singer. He began work in 1938 as an assistant in a physics laboratory at the South West Essex Technical College, before studying Physics and Mathematics at the University of London, where he received a B.Sc. in 1942. He obtained a Ph.D. in experimental physics from the University of London in 1946.

Price worked as a teacher of applied mathematics at Raffles College (which was to become part of the University of Singapore in 1948). It was there that he formulated his theory on the exponential growth of science, an idea that occurred to him when he noticed the growth in the Philosophical Transactions of the Royal Society between 1665 and 1850 – he had the complete set in his home while Raffles College had its library built.

After three years, Price returned to England to work on a second Ph.D., in the history of science, this time at the University of Cambridge. During his Ph.D. studies, he accidentally discovered Equatorie of the Planetis, a manuscript written in Middle English, which he attributed to Geoffrey Chaucer.

Around 1950, Price adopted his mother's Sephardic name, "de Solla", as a middle name. He was a "British Atheist... from a rather well-known Sephardic Jewish family", and although his Danish wife, Ellen, had been christened as a Lutheran, he did not, according to their son Mark, regard their marriage as "mixed", because they were both atheists.[1]

After obtaining his second doctorate, Price moved to the United States, where he served as a consultant to the Smithsonian Institution, and as a fellow at the Institute for Advanced Study in Princeton. His next post was at Yale University, where he worked until his death, serving as the Avalon Professor of the History of Science, and as chair of a new department that encompassed the histories of science, technology, and medicine.

In 1984, Price received, posthumously, the ASIS Research Award for outstanding contributions in the field of information science.