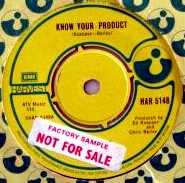 
"Know Your Product" is a song written by and Chris Bailey for rock band The Saints. Released in February 1978, it was the second single from the group's second album, "". Noted for its then-unusual mix of prominent brass with a punk sound, the track has been described as a "pile-driving surge of raw soul power and one of the greatest singles from the period."

A transitional record for The Saints, "Know Your Product" developed the aggressive punk sound of their debut single "(I'm) Stranded" (1976) while anticipating the horn-driven R&B of their next album "" (1978).

A video of the band performing "Know Your Product" was released, shot entirely in solarised colour. The single did not chart, however, Bailey noting " didn't like it, which was the biggest compliment you could have at the time." The B-side, "Run Down", also appeared on "Eternally Yours"; in place of the A-side's horns it employed to augment the band's regular guitar, bass and drum sound. Another track on the album was punningly titled "No, Your Product".

"Know Your Product" was used as the title of a 1996 compilation of The Saints' punk-era music. covered the song in 1994, while recorded a live version in the late 1990s. It appeared on the soundtrack of the film "Head On" in 1998.