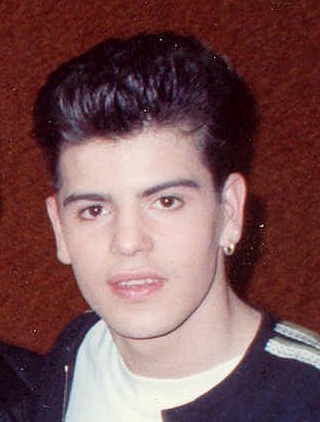 Jordan Knight (born Jordan Nathaniel Marcel Knight, , Worcester, ) is an American best known as a in the , (NKOTB), and actor which rose to fame in the 1980s and 1990s. He is best known for his distinctive style of singing, influenced by . After New Kids On The Block disbanded Jordan continued a solo career. He released 4 Top 40 singles, most famously for his hit song "Give It To You" in 1999 but since then he has failed to reach the again, Jordan has also done two studio albums, one and 1 EP.

Jordan Knight was just shy of 14 in 1984 when he joined . The band was assembled in Boston by producer . His fellow members included his brother, , as well as , and . Over the next few years Knight began teaching himself keyboard instruments and writing songs. Maurice Starr, the New Kids' producer, who also wrote much of the New Kids material, was reluctant to add the teenager's work to the band's repertoire. [ [http://www.imdb.com/name/nm0005100/bio Jordan Knight - Biography ] ]

New Kids on the Block sold over 70 million albums worldwide, generated hundreds of million of dollars of concert revenues, and paved the way for later boy bands like and . disbanded in 1994.

Jordan Knight made a comeback in 1999 by releasing his first solo single "Give It To You". The single reached #10 on , it went Platinum selling over a million singles, and was nominated for the 1999 MTV Video Music Award for Best Dance Video, though he lost to 's . The single also peaked at #35 on the chart. The album "Jordan Knight" won an "Aspire Music Award" for "Best Male Album (Pop)". Jordan's self-titled debut album was then certified gold for sales of over 500,000 copies in the US on , . The album peaked at #29 on and #9 on the chart. In 1994 after the break up of NKOTB he hosted a talk show called "Talk with Jordan Knight", the show lasted half a season.

Knight was a judge on the "" , "". He was a third season cast member on the series "" with other celebrities in 2004. He later appeared in the 2007 spin-off "", but left during the filming of the premiere episode because of the death of his maternal grandmother.

In September 2005, he also starred in a British documentary on five in the UK called "Trust Me - I’m A Holiday Rep". Six celebrities spent 10 days in the role of an Olympic Holidays holiday rep in , . He initially lacked enthusiasm for the role, which he blamed to some extent on his shyness, but came to enjoy it. In his final debriefing he earned praise from the head reps, who said they would (hypothetically) offer him a job as a children's and transfer rep.

Jordan was also a celebrity appearing on Identity, hosted by .

In 2005, Knight released a new EP entitled "" with the lead single "Where is Your Heart Tonight" which reached its peak at #12 on the Billboard Chart. He continued to tour extensively in 2005-2006 promoting his EP "".

In September 2006, Knight's latest album "Love Songs" was released by . The first single was "Say Goodbye", a duet with , that peaked at #24 on Billboard's chart.

New Kids On The Block Reunion

In 2008, New Kids On The Block officially reunited and recorded a new single "Summertime". On May 16 they performed live for the first time in 15 years on Today's Show where they announced a reunion tour and CD release. They preformed again on the Today Show on September 4th, 2008 to kick off their tour.

Jordan married longtime girlfriend Evelyn Melendez in 2004. The couple have two children together, Dante Jordan (b. 1999) and Eric Jacob (b. 2007).

New Kids on the Block Albums