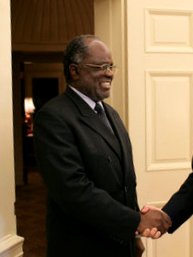 As a child, he was educated at an Anglican mission.

Under Pohamba as Minister of Lands, Resettlement and Rehabilitation, Namibia initiated a policy of partial land expropriation from landed white farmers to landless black ones. This policy replaced the previous one of "willing buyer-willing seller". In this respect, he has been considered an ally of an President .