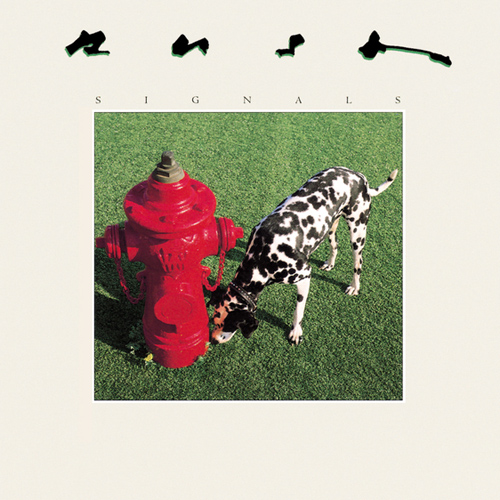 
"Signals" is the ninth studio album by the Canadian rock band Rush, released in 1982 (see ).

"Signals" was the follow-up to the successful "Moving Pictures". Stylistically, the album was a continuation of Rush's foray into the technology-oriented 1980s through increased use of electronic instrumentation such as keyboards, sequencers, and . Another noticeable change was in terms of song length and lyrical compression. The album reached #10 on the Billboard album charts and was certified Platinum (1,000,000 copies sold) by the in November 1982.Fact|date=May 2008

The writing of the album began in 1981, during soundchecks on the Moving Pictures Tour, which they taped. Coincidentally, parts of “Chemistry” were written by the band at once while they were separated from each other. Lee wrote the keyboard melody for the bridge section, Lifeson wrote the guitar riff for the verse, and Peart wrote the drum beat for the chorus, and in a move unusual for Rush, Lee and Lifeson came with the concept and title for the song and presented rough lyrics for Peart to polish. In April, in Orlando, Florida, the band attempted to watch a launch of the space shuttle. It was canceled because of a computer malfunction, and they finally observed the launch a few days later for inspiration on “Countdown”.

In September, at Le Studio, Quebec, Peart jammed with the road crew on a song, and was joined by Lee and Lifeson. It was recorded later and temporarily titled “Tough Break”. Afterward, Peart wrote lyrics for it, now titled "Subdivisions", while Lifeson and Lee came up with additional parts. Lee began experimenting with sequencers and drum machines while at home in Toronto, and came up with “The Weapon”.

In January 1982, on a docked schooner in the Virgin Islands, Peart presented his lyrics for “The Analog Kid” to Lee and they both agreed that it would make a great up-tempo rocker, with a soft chorus. At Muskoka Lakes, Ontario in March at the Grange, “Digital Man” was put together and at Le Studio, the Ska style bridge was created along with the sequencer pattern with the guitar and bass. Producer Terry Brown was not impressed and initially refused to record it. In May, the band set out to record a song that had a time limit of 3:57 to keep both sides of the record equal. “New World Man” was written and recorded on the same day, giving it a spontaneous live feel. In June, from the band FM was invited to play electric violin on “Losing It”. [Signals Tour Book] [Power Windows http://www.2112.net/powerwindows/]

The opening track from "Signals" is "Subdivisions." The track would become a staple of the band's concert setlists for many years.

"Digital Man," a slightly reggae-based song, ultimately led to the end of the band's relationship with long-time producer Terry Brown. Brown was reluctant to leave behind the band's progressive-rock past, while band members, especially Lee, wanted to explore new musical directions. The mid-section of the song has been compared with the song "Walking On The Moon" by .

"The Weapon" (Part II of the 'Fear' trilogy) would be featured in the album's supporting tour and would include a video opening hosted by "" of SCTV fame.

"New World Man" became a surprise FM radio hit for the band, peaking at #21 on the Billboard Hot 100 singles chart for three weeks in October and November of 1982. It remains the band's highest charting single in the US to date. The song was written and recorded at the end of the recording sessions with the intention of preserving the continuity of the then-popular format. This allowed for two roughly 21-minute sides with as little "dead air" between them as possible.

"Losing It" includes a guest appearance by FM alumnus on electric violin. Neil Peart's lyrics reference, among other things, the latter years of writer : "for you the blind who once could see, the bell tolls for thee...". This song remains the only track from the album never to have been performed in concert.

The lyrics in the final track, "Countdown," describe the launch of the Space Shuttle "Columbia" in 1981 which the band witnessed. The song features audio clips of some of the radio talk recorded during the maiden flight. It was a minor UK chart hit in early 1983.

"Signals" represented the band's last collaboration with producer Terry Brown, who had co-produced every Rush album since 1975's "Fly by Night", and had engineered the eponymous first album in 1974.

(The Track Listing is from the CD Release. This album was originally released on LP, cassette and 8 track.)

Mobile Fidelity Sound Labs issued a Gold CD remaster in 1994. That release is now out of print. [http://www.mofi.com/goldcd.htm]
* In "The Weapon," one line of lyrics that appears on all other pressings is missing from the MFSL release (at 3:12). MFSL has stated that this was the case on the master delivered to them by the band.
* Also "New World Man"'s ending is a few seconds longer than the Mercury Records issues.

A Mercury Records remaster was issued in 1997.
* The tray has a picture of three fingerprints, light blue, pink, and lime green (left to right) with THE RUSH REMASTERS printed in all caps just to the left. All remasters from Moving Pictures through to Hold Your Fire are like this. This is just like the cover art of .
* Also includes the infrared pictures of the band that were missing from the original CD issue.
* Also includes the lyrics and credits.