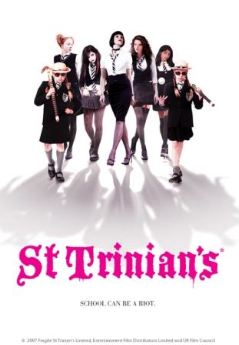 "St Trinian's" is the sixth in a long-running series of films based on the works of cartoonist . The first four films form a series, starting with "" in 1954, with sequels in 1957, 1960, 1966. The 1980 "" was not a critical success. The books are actually based on . Ronald Searle stayed with the parents of a schoolgirl Cecily Johnston during the war and when told about the goings on decided to draw the cartoons. The school was closed shortly after the war and is now St Leonards House in Pollock Halls, student residences for Edinburgh University.

St Trinian's is an anarchic school for uncontrollable girls. The film opens with meek and timid Annabelle Fritton, niece of the highly eccentric headmistress Miss Fritton, being admitted to the school. She meets Kelly, , who shows her around the school and introduces the various cliques in the school - Posh Tottys (slang for gorgeous girls), s, s, s and First Years. Annabelle has a rough first night in the school when her towel and dressing gown are taken from the shower and she is broadcast on the internet by the other girls while running naked from the shower to the dormitory. She phones her father and demands to be taken away from the school.

Flash Harry pays a visit to the school and makes a deal with the girls for some lab-made vodka. The last batch had side effects including blindness, paralysis, and death, all symptoms of poisoning, indicating lack of care in distillation of the liquor.

A few days later the school has a hockey match against Annabelle's old school - their rivals . The Cheltenham captain is Verity Thwaites, daughter of the education minister. The girls give a hostile and violent welcome to their visitors and the match ends in a brawl between the two schools. Later, Annabelle overhears her father telling her aunt that he doesn't think Annabelle fits in with the family, which hurts her feelings. Later that day, her aunt makes her feel a part of the family and gets her to release her anger. The other girls at the school give Annabelle a make-over and make her feel part of the school. Meanwhile the education minister, Geoffrey Thwaites, is inspecting the school. It is revealed that Thwaites and Miss Fritton were acquainted, and possibly romantically linked, while at university. Thwaites' decision to invite the press to witness for themselves the chaos of St Trinian's backfires as St Trinian's appears faultless, while Thwaites is repeatedly humiliated (smashing a tank of ants, being caught with his trousers down in the Posh Tottys' boudoir, being cast into a water butt and finally kicking Miss Fritton's pet dog through an open window, fatally, when it grabs his trouser leg).

Meanwhile, the bank is threatening it with closure for bankruptcy. Kelly hears the talk about closure and tells the rest of the school. They then concoct a plan to save the school by getting to the final of the "School Challenge" quiz tournament (which is to be held in the ), and stealing the painting '' which is housed there. Annabelle tries to persuade Flash Harry to act as a prestigious gay German art dealer, so that he can sell a false version of the painting to her father. He initially refuses, but Kelly persuades him to comply (as he secretly has feelings for her, although she knows about them and uses them to her advantage; and he does not want to look stupid in front of her). The school team for School Challenge consists of three of the Posh Tottys, Chelsea, Peaches and Chloe. They reach the final by cheating (against Ampleforth they steal the answers before the match; against Bedales they lace their opponents' drinks with ; the Eton team is rendered clueless by their seduction).

During the final Kelly, Taylor and Andrea foil the security for the painting that they're after and eventually retrieve it but on the way back the cable that they used to climb over the top of the audience of the final of School Challenge snaps just after Taylor and Andrea get over to the other side. Kelly gets stuck with no way to get to other side again. Mrs Fritton sees that Kelly needs help and goes to save the day, having to distract education minister Geoffrey Thwaites through a combination of liquor and seduction on the way. Meanwhile Annabelle takes care of Verity.

"St Trinian's" was released in the United Kingdom on , in Australia on , and in New Zealand on . Other European releases are planned for on , and on . [ [http://www.imdb.com/title/tt0964587/releaseinfo Germany Release dates] ] [ [http://nz.movies.yahoo.com/Coming+Soon/to-cinemas/ New Zeland release date] ]

A book based on the film, adapted by Pippa Le Quesne from Piers Ashworth and Nick Moorcroft's screenplay was published in late 2007 by , ISBN 978-0-141-32417-3. The accompanying soundtrack was released on , , along with a music video for the theme song performed by , who make a cameo appearance in the film. "St Trinian's" was released on region 2 in the UK on , . It is also available on .

"St Trinian's" makes several references to past films of . Camilla Fritton's dog is named after Firth's starring role as Mr. Darcy in the 1995 adaptation of "Pride and Prejudice". Geoffrey's toss into a fountain and emerging in a soaking wet shirt refers back to a popular scene in the 1995 version of "Pride and Prejudice" and "", which starred Firth as and was itself inspired by "Pride and Prejudice". [cite web |last=Fenton |first=Andrew |url=http://www.news.com.au/heraldsun/story/0,21985,23439798-5006023,00.html |title=Colin Firth has ended his feud with Rupert Everett |publisher="" |date=, |accessdate=2008-06-06] The answer to the quiz question, "What is the name of the book "First Impressions" more famously known as?", is "Pride and Prejudice". In their first meeting, Geoffrey and Miss Fritton mention that they knew each other in "", the title of a 1984 film starring Firth and . When the girls first see the painting "" in the National Gallery, they refer to the film of that name in which Firth played the painter . The girls even refer to his real name in this scene when they see the painting, even though he plays a different character in this film by saying "You can so see why Colin Firth wanted to shag her!"

Other references in "St Trinian's" are the twins Tara & Tania accidentally blowing up the shed and saying "you were only supposed to blow the bloody doors off", a direct reference to the 1960's heist movie "". When the Minister suggests St. Trinian's be the first school to be addressed under his new regime, a bureaucrat says "be afraid, be very afraid", a direct quote from the 1987 movie "". The picture in Miss Fritton's study is a painting of , who played Millicent Fritton, the headmistress in the original films. During the School Challenge final, Holly is shown using the search engine Ask Jeeves after Stephen Fry asks a question, a reference to Fry's role as Jeeves in "".It also makes reference to , in the scene where Annabelle is running nude the girls have put the live feed on YouTube.