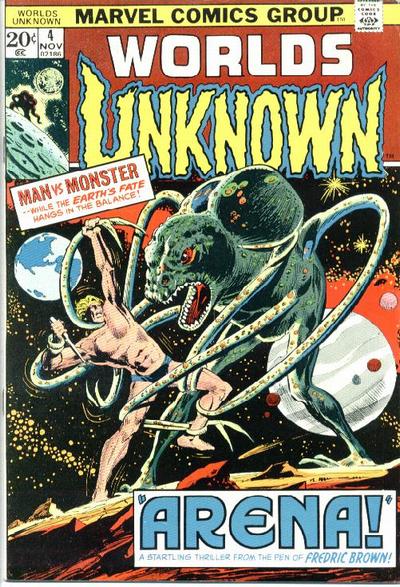 "Worlds Unknown" was a published by in the 1970s that adapted classic of that genre, including works by and .

"Worlds Unknown" ran for eight issues, between May 1973 and August 1974. The title was one of four launched by Marvel Comics editor-in-chief to form a line of science fiction and horror with more thematic cohesiveness than the company's earlier attempts that decade,

The final two issues changed direction and featured an adaptation of the contemporaneous film "" (1974), based on the screenplay by and the story by Clemens and . Titled "The Golden Voyage of Sinbad: Land Of The Lost", it was by writer and penciler .

Five months after the title's cancellation, Marvel would revisit the idea of science-fiction story adaptations with the black-and-white comics "", which ran for six issues in 1975.

Critic David A. Roach wrote of the series: " [T] he best issues are those featuring Gil Kane or Ralph Reese.... The first "Worlds Unknown" manages this with stunning Reese art on Fred Pohl's "The Day After the Day the Martians Came!" (adapted by Gerry Conway) and lyrical Kane drawings for Ed Hamilton's "He That Hath Wings," which the artist also scripted".