Cryotherapy is the local or general use of low temperatures in medical therapy or the removal of heat from a body part. The term "cryotherapy" comes from the Greek cryo (κρυο) meaning cold and the word therapy (θεραπεια) meaning cure. It has been around since the 1880-1890s.

Its goal is to decrease cellular metabolism, increase cellular survival, decrease inflammation, decrease pain and spasm, promote vasoconstriction, and when using extreme temperatures, to destroy cells by crystallizing the cytosol. The most prominent use of the term refers to the surgical treatment, specifically known as cryosurgery. Other therapies that use the term are cryogenic chamber therapy and ice pack therapy. 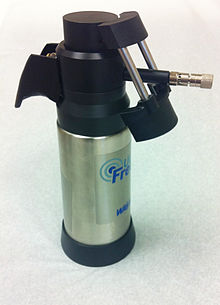 Cryosurgery is the application of extreme cold to destroy abnormal or diseased tissue. Cryotherapy is used to treat a number of diseases and disorders, most especially skin conditions like warts, moles, skin tags and solar keratoses. Liquid nitrogen is usually used to freeze the tissues at the cellular level. The procedure is used often because of its efficacy and low rates of side effects.

Hilotherapy is a treatment, which allows the controlled application of cooling to selected areas of the face and body. A cuff is wrapped around the traumatized area, which is connected to the device that allows the traumatized area to be cooled at a specific temperature. The difference between Hilotherapy and other cryotherapy approaches is the range of temperature and the constant application. By controlling the temperature between 10°C and 20°C, the typical benefits from cryotherapy occur, such as immediate vasoconstriction with reflexive vasodilation, decreased local metabolism and enzymatic activity, and decreased oxygen demand. However, by not reducing below 10°C, the lymphatic drainage is not disturbed, nor is the creation of fibroblasts and the microcirculation, all of which cease to function during the normal application of ICE and when the tissue falls below the 10°C. Hilotherapy is commonly used for the recovery of orthopedic surgery, plastic surgery and Oral and maxillofacial surgery.

Ice pack therapy is a treatment of cold temperatures to an injured area of the body. An ice pack is placed over an injured area and is intended to absorb heat of a closed traumatic or edematous injury by using conduction to transfer thermal energy. The physiologic effects of cold application include immediate vasoconstriction with reflexive vasodilation, decreased local metabolism and enzymatic activity, and decreased oxygen demand. Cold decreases muscle spindle fiber activity and slows nerve conduction velocity, therefore it is often used to decrease spasticity and muscle guarding. It is commonly used to alleviate the pain of minor injuries.

According to Costello et al. (2011) [1] a relatively new modality of cryotherapy, called whole body cryotherapy (WBC), is currently being offered by clinicians as an alternative to cold water immersion or ice packs. Administered through the use of a cryogenic chamber, WBC is a treatment whereby the patient is placed in a cryogenic chamber for a short duration (i.e. no more than three minutes, which is comparable to ice swimming), and if used properly, will not destroy tissue. Whole body cryotherapy originated in Japan in 1978. However, it was a group of Polish scientists who took the idea and made whole body cryotherapy the physical therapy it is today. The Olympic rehabilitation centre in Spala, Poland opened in May 2000 and has been used as a training and injury rehabilitation centre for many sporting bodies.

The chamber is cooled, typically with liquid nitrogen, usually to a temperature of −120 °C (−184 °F)—although temperatures of −140 °C (−220 °F) or even −160 °C (−256 °F) have been used.[2] The patient is protected from acute frostbite with socks, gloves and mouth and ear protection, but in addition to that, wears nothing but a bathing suit. The patient spends a few minutes in the chamber. During treatment the average skin temperature drops to 12 °C (54 °F), while the coldest skin temperature can be 5 °C (41 °F). The core body temperature remains unchanged during the treatment, however it may drop slightly afterwards. Therapy triggers the release of endorphins which induce analgesia (immediate pain relief).[citation needed]

Patients report that the experience is invigorating and improves a variety of conditions such as psychological stress, insomnia, rheumatism, muscle and joint pain, fibromyalgia, itching, and psoriasis.[citation needed] The immediate effect of skin cooling and analgesia lasts for 5 minutes, but the release of endorphins can have a lasting effect, where the pains and signs of inflammation as found in blood tests remain suppressed for weeks.[citation needed] The effects of extreme cold and endorphin release are scientifically studied. Curiously, some patients compare the feeling to sauna at 110 °C (230 °F).[citation needed] Wales rugby union international Sam Warburton, who along with his teammates used the Spala facilities whilst training for the 2011 Rugby World Cup, has dubbed the chambers "evil saunas", but added:

"I'd be lying if I didn't say it was a pretty savage experience, but the other side of the coin is that it is definitely working and allowing us to train in a way that would be impossible under normal conditions."[2]