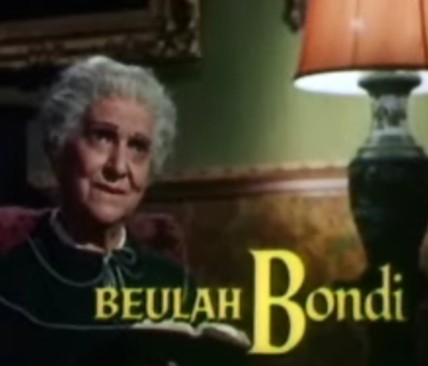 Bondi was born as Beulah Bondy in , the daughter of Eva (née Marble) and Adolphe Bondy. [ [http://homepage.mac.com/peterlucia/noweverthen/many/bondi.html Beulah Bondi ] ] Bondi began her acting career on the stage at age 7, playing the title role in the play "Little Lord Fauntleroy" in a production at the Memorial Opera House in . She gained her Bachelors and Masters degrees in at in 1916 and 1918, and moved to film in the 1930s. Her debut movie role was as "Emma Jones" in 's "Street Scene" (1931), which starred , and in which Bondi reprised her stage role, followed by "Mrs. Davidson" in "Rain" (1932), which starred and .

She was one of the first five women to be nominated for an Academy Award in the newly-created category of "Best Supporting Actress" for her work in "", although she lost the award to . Two years later, she was nominated again for "", and lost again, but her reputation as a character actress kept her employed.

She would most often be seen in the role of the mother of the star of the film for the rest of her career, with the exception of 1937's "" as the abandoned Depression-era 'Ma' Cooper. Her own personal favorite performance Fact|date=October 2007 was as the bigoted "Ma Bridges" in 1957's "".

She often played mature roles in her early film career even though she was only in her early 40s. Bondi played James Stewart’s mother in four films: "", "","", and "". She made her final appearances as "Martha Corinne Walton" on the television series "", in the episodes "The Conflict" (9/73) & "The Pony Cart" (12/76). She received an award for her performance in the latter episode. When her name was called it appeared at first that she was not present but she walked slowly up to the podium to receive the award and was given a standing ovation. She thanked everyone for honoring her while she was still alive.

Despite the fact that she was known for playing mother figures, Bondi never married in real life. She died from complications due to broken ribs suffered when she tripped over her cat on , aged 91.