The Barber of Seville (cartoon)

The Barber of Seville (cartoon) 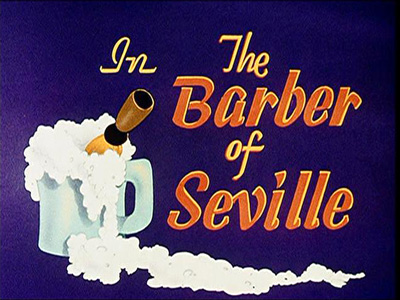 "The Barber of Seville" is the tenth in the "" series. Released theatrically on , , the film was produced by and distributed by Universal Pictures.

Woody arrives at "Tony Figaro's" barber shop in hopes of getting a "victory haircut" (a then-contemporary reference). Finding the shop's proprietor out for an Army physical, Woody attempts to cut his own hair and those of other customers with comic results. The first customer, a Native American, asks the woodpecker for "a quick ". What he gets instead, however, is a headdress reduced to a by hot towels.

"You give chief the bird," the angry client remarks while holding the shuttlecock, "me give you scalp treatment!"

"Oh no, Chiefie," responds Woody. "Me give "you" scalp treatment!" With that, Woody bops the chief over the head with a mallet, and launches him out of the barber's chair and across the street, where he lands and becomes a .

The second customer is a burly Italian construction worker, who comes in and asks for "the whole works". Once Woody blow-torches the man's construction helmet off his head, he proceeds to lather his client's face, chin, mouth, and boots while singing Rossini's "". Woody then produces a sharp razor and begins shaving the man. Woody elevates the barber's chair to the ceiling whiles singing an , allowing the man to fall to the ground and destroy the chair. Woody then begins liberally swinging the razor at his frightened client, who runs to escape him. A chase throughout the barbershop ensues - as Woody doubles the tempo of his singing - until the woodpecker corners the man in the barber's chair and proceeds to give him a shave and haircut at manic speed. The construction worker is dusted off and sent out the door on his way, but the angry client enacts a quick bit of revenge as Woody begins to laugh. The man picks Woody up and slings him through a glass window and back inside the shop, where the woodpecker lands and is bopped by shaving mugs falling from a broken shelf. As a last touch, the falls on Woody, whose head is seen caught and mangled inside the pole as the cartoon irises out.

"The Barber of Seville" was the first cartoon to feature a more streamlined character design for Woody Woodpecker, courtesy of veteran animator and art director . In prior shorts, Woody had had a more grotesque appearance, including buck teeth, a receding chin, and thick stubby legs. Heinemann removed these features, and restructured Woody's body to conform to the modern animation standards in use for characters such as those appearing in and Warner Bros cartoons.

In tandem with the use of the new Woody design, "The Barber of Seville" was the first Woody Woodpecker cartoon to use the standardized opening title card, animated by Hawkins, featuring Woody popping out of a log, asking "Guess Who?!", and delivering his trademark laugh. The audio for this opening sequence is lifted from Woody's first starring appearance in the 1941 cartoon "", in which Woody was voiced by . , also the co-storyman on "Barber of Seville", provides Woody's speaking voice for the cartoon proper, with an unidentified singer performing as Woody's singing voice. Finally, "The Barber of Seville" was the first Woody cartoon directed by veteran animator James "Shamus" Culhane, who had been working on Lantz's "" for a year prior.

A parody of 's opera of the same name, "The Barber of Seville" is noted for its uses of speed, timing, and music synchronization. During the shaving of the second client, several shots are presented in rapid succession, some lasting only one-fourth of a second. Woody's demeanor and attitude are designed to match the music, during the famous "Figaro" portion of the tune, Woody splits into three, then four, then five instances of himself, in less than two seconds of screen time. Culhane later called "The Barber of Seville" "one of my most satisfying achievements as a director". [ Culhane, Shamus (1986). "Talking Animals and Other People". New York: Da Capo Press. ISBN 978-03-0680-830-2. Pg. 259.]