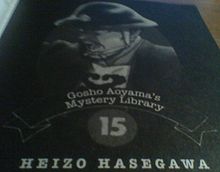 Heizo Hasegawa, as he appeared in volume 15 of Case Closed

Onihei Hankachō (鬼平犯科帳?) is a popular series of stories and television jidaigeki in Japan. A story by Shōtarō Ikenami in the December 1967 issue of the magazine "All Yomimono" developed into a series, which Bungei Shunju published the following year. In all, 135 stories were published.

The title character is Hasegawa Heizō, head of the special police who had jurisdiction over arson-robberies in Edo. Nicknamed "Onihei," meaning "Heizō the demon," he led a band of samurai police and cultivated reformed criminals as informants to solve difficult crimes.

Four actors have portrayed Onihei on television. The first was Matsumoto Hakuō I. Tetsurō Tamba and Kinnosuke Nakamura also played the lead in Toho series on NET. More recently, Nakamura Kichiemon II, son of Hakuō, led a cast in a Shochiku production on Fuji Television.