Dundee University Students' Association (DUSA) is the students' association, legal representative and students' union for matriculated students of the University of Dundee.

Membership of the body is automatic for all students of the University, although it is possible under statutes to renounce this membership at any time. The Dundee University Students' Association, as with its neighbours in the other ancient-organised universities in Scotland, is co-existent with the University's Students' Representative Council.

The DUSA building is located in Airlie Place, in the centre of the University's Main Campus and caters as a private members' club offering bar, nightclub and refectory services for many students, particularly undergraduates. It is also responsible for the operation of a number of small shops throughout the university's campuses. In 2004, it underwent major refurbishment work. This included adding a new nightclub, and redesigning the interiors of the bars and recreational spaces. The building also contains the University's main swimming pool. DUSA also provides a number of other typical students' union services such as advocacy on behalf of its membership and assistance to individual students.

The main DUSA bar, The Liar, takes its name from a novel by the same name written by former Rector Stephen Fry.

The building also contains branch of the Royal Bank of Scotland and a shop selling groceries, alcoholic beverages, snack food, stationery and university merchandise which is a Premier franchise which reinvests its profits back into DUSA.

History of the Association 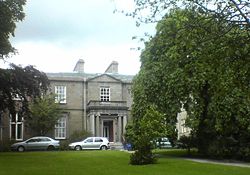 The Union gained its first accommodation by the renting of the Ellenbank building in 1905 with £4,000 raised from the University College Bazaar - a fairly regular event of official speakers, entertainments, live music, comedy and stalls - held in October 1903. The building itself was constructed as a villa in 1813 and had been acquired by the University College in more recent years.

Ellenbank was separated by levels, providing separate rooms for the male and female students - with the ladies entering up a flight of stairs to the rear and the gentlemen having sole use of the "handsome" entrance hall. Despite the segregation, this was probably the first Students' Union in the United Kingdom to admit both men and women to the same association and also to allow them use of the same building. Ellenbank later underwent extensive renovation in the 1920s, and was connected to the neighbouring (and similar) Union Mount building, which housed the College library. By 1969, it was decided that new and larger premises were necessary and a new building, named New Dines, was completed in 1974. New Dines was demolished in 1986 and the new Central Library and Students' Union building were constructed on the site thereafter. The Ellenbank building is now used by the university's School of Accountancy.

The present publication issued by the Association is known as The Magdalen. From its beginnings in 2006, the magazine has undergone several transformations under former Editors Lauren Bennie, Natalie Coupar, Beth Shackley and now Finlay Craig. Content is more politically focussed with issues addressing both domestic and international development. A free publication, the magazine is circulated within the Union building and associated buildings on the campus. 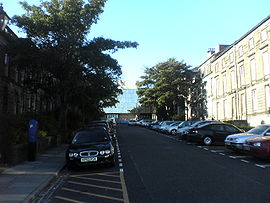 There is a long history of student publications at Dundee - before 2006, The Magdalen was known as The Student Times and criticised for being bland and inoffensive.[1] This bucked the tradition of very political publications such as Annasach (Gaelic: Unusual, Unconventional) which was edited for a time by controversial ex-MI5 agent David Shayler, who was responsible for printing extracts from Peter Wright's Spycatcher - a book banned in the UK at the time.

Lord George Robertson was also a columnist for the newspaper in its early days.[2] Another former Labour MP, Brian Wilson, was also involved as an early Editor of Annasach. It was his experience as Editor that helped him found the West Highland Free Press in 1972.

Annasach survived from the University's independence in 1967 until 1994.[3] Prior to this, College was the publication in general circulation at Queen's College Dundee, which went on to become the university.

Significant transformations began in 2006 when Vice President of Communications Mike Sheldon took the decision to drive campus media forward. The VPC called a meeting with The Student Times contributor Darren Reid and D.U.S.A's Present Student Member for Communications Lauren Bennie to discuss the future of student publications on campus.

On Mike Sheldon's lead, The Student Times became The Magdalen and ran with its first headline "Welcome to the jungle! (and University)". With four other contributors, Issue 1 contained 14 pages of University news and advertising, five of which were solely focussed on The Executive.

By Issue 2, "The Magdalen Strikes Back", more topical issues were pushed on to the pages - a sign of the political feelings on campus. With Darren Reid and Lauren Bennie on Editing and Layout, additional contributors were recruited, including Milan Bogunovic who later became President of DUSA. Article coverage included political propaganda, the smoking ban and North Korea.

As the 2006/07 term neared an end for contributors and the magazine, it became clear that The Magdalen required new writers and new direction. When David McLeod took over as Vice President Communications, he put Lauren Bennie at the helm of the magazine and student media communications. A long term plan was drafted and The Magdalen received the financial backing required to regularly publish 8 issues throughout the student year. SRC's Student Media Representative Lauren Bennie primarily recruited SRC members' Gavin McNee and Laurie Cameron to contribute opinion pieces and music reviews.

A Memorandum of Understanding, co-written by the Editor and the DUSA President at the time, Andrew Smith, ensured that The Magdalen would be guaranteed office space and financial security by DUSA. A change to the structure of The Magdalen also meant that the Magdalen Editor would be elected, rather than handpicked, by the student community.

Her successor, Beth Shackley, vastly improved both the design and content of the magazine. The current editor Finlay Craig was elected as Editor in March 2011.

Founded in 2009 by students Samuel Gray and Robin Murphy, and launched in October 2010, Discover Radio is Dundee University's new student radio station. Funded and facilitated by DUSA, it provides entertainment to students and non-students alike. It is run by, and for, the students of Dundee and aims to help undergraduates get their first foot on the media industry ladder.

Discover Radio can be found broadcasting live at discoverradio.org

DUSA TV was formed in late 2009 and regularly produces content by students, for students, which are then published on DUSA TV's YouTube channel and DUSA's own website.

DUSA is affiliated to the Coalition of Higher Education Students in Scotland (CHESS) and the National Postgraduate Committee. Unlike most students unions in the United Kingdom, DUSA is not affiliated to the National Union of Students. This stance was confirmed in a referendum held on the 1 and 2 April 2010 in which 1795 students voted against and 467 voted for NUS affiliation.

The Union has a collective purchasing and co-ordination agreement with a number of other students bodies through the Northern Services group [1].

The Sports Union is affiliated to the British University Sports Association (BUSA).