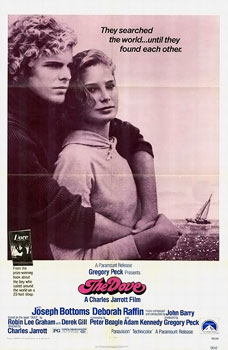 The picture was produced by , the third and last feature film he would produce. [imdb name|id=0000060|name=Gregory Peck.]

The drama is based on the real life experiences of , a young man who spent five years sailing around the world as a single-handed sailor, starting when he was 16-years old. The story is adapted from "Dove" (1972), the book Graham co-wrote about his seafaring experiences with Derek L.T. Gill.

The film tells of real-life (), a 16-year-old boy who sets out in a 24-foot and is determined to be the youngest person to circumnavigate the world. He's planned the long trip with his sailor father Lyle Graham (John McLiam) for years.

He sets sail on his journey and on one of his stops he meets and falls in love with the gregarious and attractive young woman, Patti Ratteree (). After much banter Patti decides to follow Graham throughout his long journey. She meets him in , , , , and the .

As he travels around the globe, Graham experiences many adventures on the sea and land as he grows from a teenager to a young adult. Yet Graham finds the trip a very lonely experience, especially when the wind dies on him on the high seas. At one point he badly wants to quit the voyage but Patti (now his new wife) and his father talk him out of it.

At the end of the film we see Graham sailing into Los Angeles with crowds welcoming him home.

Robin Lee Graham (born 1949) is a man who set out to sail around the world alone as a teenager in the summer of 1965. "" carried the story, and he co-wrote a book detailing his journey called "Dove." Graham was just sixteen when he set out from and headed west in his 24-foot boat. He got married along the way, and after almost five years, sailed back into his home port. After he and his wife Patti attended , they moved to and settled down.

Critic Nora Sayre, film critic for "", thought the film was too wholesome, so much so that Sayre wanted harm to come to the characters. Yet she appreciated 's cinematography and wrote, "The Dove" ... is probably far too wholesome for most of the families I know, although there may be a radiant audience lurking just outside the realms of my acquaintance...Joseph Bottoms, as the young sailor, smiles too much in the first half of the movie; after that, he cries too much. His initial overwhelming sunniness turns the viewer into a sadist: You're glad when his cat gets killed or grateful when a shark appears in the ocean. Deborah Raffin, as his winsome girlfriend, is rarely allowed to stop laughing and wagging her head; the two grin and glow at each other until you yearn for a catastrophe." [ [http://movies2.nytimes.com/mem/movies/review.html?title1=Dove%2c%20The%20%28Movie%29&title2=&reviewer=NORA%20SAYRE&pdate=19750220&v_id=14487 Sayre, Nora] . "The New York Times", film review, "The Dove": Sailing Film Is Awash With Wholesomeness," .]

Others liked the film. Film critics Frederic and Mary Ann Brussat, who reviewed the film much later after the film's release on their website "Spirituality and Practice", appreciated the film and its message, and wrote, "Producer was perceptive when he decided to make a film based on the true life on the youngest person to circumnavigate the world alone...Graham's exploits and his accompanying struggle to sort out his feelings about himself and his loyalties to family and girlfriend are fascinating and provocative." [ [http://www.spiritualityandpractice.com/films/films.php?id=6956 Brussat, Frederic and Mary Ann Brussat] . "Spirituality and Practice", film review.]

The producers marketed the film using the following tagline::They searched the world...until they found each other.

The film opened in the United States in September 1974. Paramount released a video of the film on , .

A DVD of the movie has not been released.

An original motion picture soundtrack of the film was released in 1974 by and contained thirteen tracks (00:31:43). On , a was released on the Artemis record label. The song "Sail the Summer Winds," sung by , was nominated for a and was a top selling hit in . It hovered just outside the British Top 50 for four months. [ [http://www.lynpaulwebsite.org/OnDisc-Albums.htm#anchorDove Lyn Paul] official web site.] The score was written by composer John Barry.