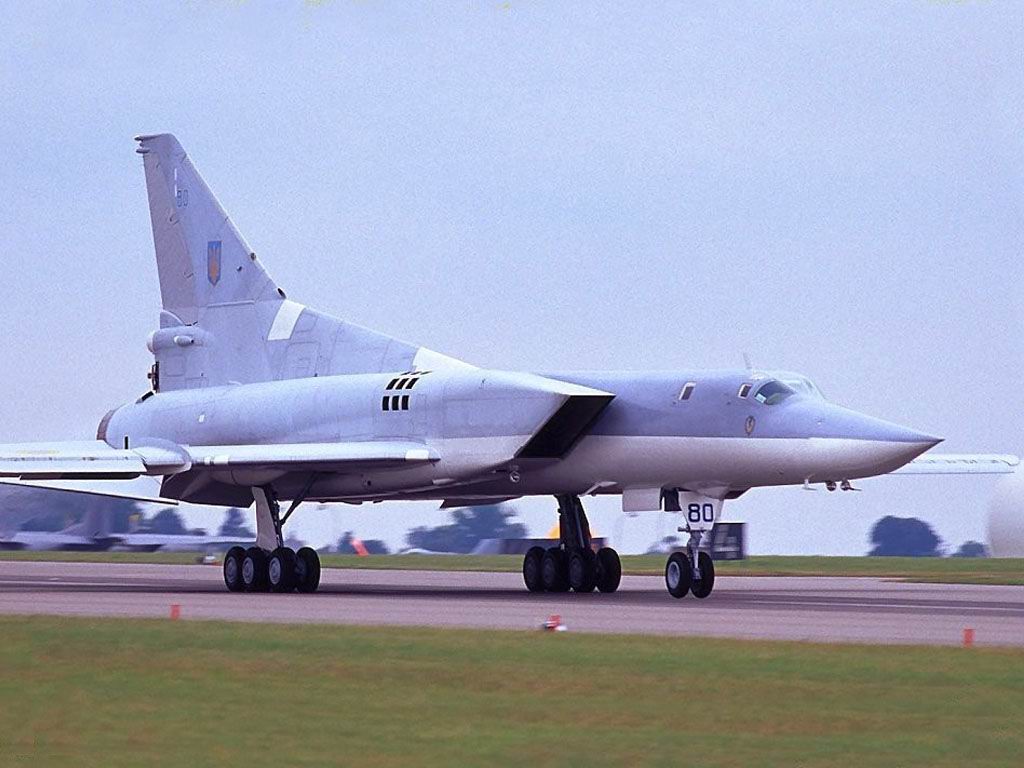 The Tu-22M ( "Backfire") is a , , long-range strategic and maritime strike developed by the . Significant numbers remain in service with the .

The had not proved particularly successful, in some respects being inferior to the earlier Tu-16. Its range and take-off performance, in particular, were definite weak points. Even as the Tu-22 was entering service, OKB Tupolev began work on an improved successor.

As with the contemporary MiG-23 (NATO 'Flogger') and Su-17 (NATO 'Fitter') projects, the advantages of variable-geometry wings seemed attractive, allowing a combination of short take-off performance, efficient cruising, and good high-speed, low-level ride. The result was a new swing-wing aircraft called Samolët 145, derived from the Tu-22, with some features borrowed from the abortive Tu-98 (NATO 'Backfin').

The first prototype, Tu-22M0, first flew on . The resultant aircraft was first seen by around that time. For several years it was believed in the West that its service designation was Tu-26. During the negotiations of the the Soviets insisted it was the Tu-22M. At the time, Western authorities suspected that the misleading designation was intended to suggest that it was simply a derivative of the Tu-22 rather than the far more advanced and capable weapon it actually was. It now appears that Tu-22M was indeed the correct designation,Fact|date=October 2008 and the linkage to the earlier Tu-22 was intended by Tupolev to convince the Soviet government that it was an economical follow-on to the earlier aircraft.

Only nine of the earliest Tu-22M0 preproduction aircraft were produced, followed by nine more Tu-22M1 pilot-production craft in 1971 and 1972. They were known as Backfire-A' by NATO.

The first major production version, entering production in 1972, was the Tu-22M2 (NATO 'Backfire-B'), with longer wings and an extensively redesigned, d fuselage (raising the crew complement to four), twin NK-22 engines with -style intakes, and new undercarriage carrying the in the wing glove rather than in large pods. These were most commonly armed with long-range s/s, typically one or two s. Some Tu-22M2s were later reequipped with more powerful NK-23 engines and redesignated Tu-22M2Ye. In service, the Tu-22M2 was known to its crews as "Dvoika" ('Deuce').

The later Tu-22M3 (NATO 'Backfire C'), which first flew in 1976 and entered service in 1983, had new NK-25 engines with substantially more power, wedge-shaped intakes similar to the , wings with greater maximum sweep, and a recontoured nose housing a new Leninets PN-AD and NK-45 nav/attack system, which provides much-improved low-altitude flight (although not true flying). It had a revised tail turret with a single cannon, and provision for an internal rotary launcher for the missile, similar to the American . It was nicknamed "Troika" ('Trio'), although apparently it is sometimes referred to as Tu-22 in Russian service.

One area of controversy surrounding the Tu-22M is its capacity for . As built, the Tu-22M has provision for a retractable in-flight refueling probe in the upper part of the nose. This was allegedly removed as a result of the SALT negotiations,Fact|date=August 2008 although it can be easily reinstated if needed,Fact|date=August 2008 and in fact a pre-production Tu-22M1 (NATO Backfire-A) with refueling probe can be seen at today.

A small number, perhaps 12, of Tu-22M3s were converted to Tu-22M3(R) or Tu-22MR standard, with Shompol side-looking radar and other equipment. Fact|date=May 2008 A dedicated variant, designated Tu-22MP, was built in 1986, but to date only two or three prototypes have apparently been built. Some surviving Tu-22s have had equipment and avionic upgrades to Tu-22ME standard (which does not have a separate NATO reporting name at this time).

Total production of all variants was 497 including pre-production aircraft. Fact|date=August 2008

During the , the Tu-22M was operated by the (Soviet Air Force) in a strategic bombing role, and by the AVMF ("Aviatsiya Voyenno-Morskogo Flota", Soviet Naval Aviation) in a long-range maritime anti-shipping role.Fact|date=August 2008 The United States was highly concerned about the threat that this new bomber posed. By 1982 fewer than 200 had been built. While it was unable to complete a round trip to the contiguous United States without aerial refueling, it posed a tremendous threat to the US Navy and to NATO assets everywhere. Tu-22M's that were either refueled, on one-way missions, or d had the ability to make low-level penetrations of United States territory almost at will. relied heavily on early detection and interception of high-altitude bombers and had comparatively few surface-to-air assets to defend against such an attack.Fact|date=October 2008Fact|date=August 2008

The Tu-22M saw its first combat use in from 1987 to 1989. Its usage was similar to the deployment of bombers in , dropping large tonnages of conventional ordnance. The Russian Federation used the Tu-22M3 in combat against Chechen forces in 1995, carrying out strikes near . Fact|date=August 2008

Russian military officially acknowledged the loss of a Tu-22M3 bomber to Georgian air defenses early in the . [cite web |url=http://www.lenta.ru/news/2008/08/09/planes/ |title=Генштаб признал потерю двух самолетов в Южной Осетии |publisher= |date=August 9, 2008 |accessdate=2008-08-09] [cite web |url=http://www.fpri.org/enotes/200808.chang.russiaresurgentgeorgia.html#ref6 |title=Russia Resurgent: An Initial Look at Russian Military Performance in Georgia |date= August 13, 2008|accessdate=2008-10-07] The pilot claimed the aircraft was being used for reconnaissance over and . Althought left unspecified, it is assumed that the news article was referring to the Tu-22M, not the .RIA Novosti is reporting this aircraft as the Tu-22 with NATO reporting name BLINDER, which would be an older aircraft than the variable-geometry naval aircraft Tu-22M. [Walker, Shaun " [http://www.independent.co.uk/news/world/europe/war-is-absurd-says-russian-pilot-shot-down-over-georgia-898991.html War is absurd, says Russian pilot shot down over Georgia] ". "The Independent.co.uk". 16 August 2008. Retrieved 11 September 2008.]

The Soviet Union did not export the Tu-22M, but the break-up of the USSR left some aircraft in the possession of former Soviet republics. has 52 (the serviceability of which is unclear). possessed an additional 29, but since the Ukrainian government's renunciation of s, those aircraft have been destroyed, the last in 2004.

has sought export customers for the Tu-22M since 1992, with possible customers including , and the , but no sales have apparently materialized. Four were leased to India in 2001 for maritime reconnaissance and strike purposes. [ [http://www.aeronautics.ru/news/news001/afm170.htm Russian Aircraft for India] ]

** From 1× up to 3× or missiles in weapons bay and on wing pylons "or"
** 1× internal rotary launcher for six short-range nuclear missiles plus two more Kh-15 or Kh-27 on each wing pylon
** Various freefall bombs. 69× or 8× as typical arnament.