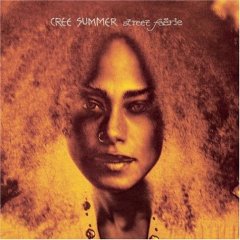 "Street Faërie" was the first full-length album recorded by . It was released in 1999 on , a now-defunct imprint of . Summer, who is , and a political and activist, wove themes of , romantic liaisons, and spirituality into the lyrics of -heavy pop and folk songs. "Miss Moon" is an ode to lovemaking while a woman is . "Fall," a fully orchestral , reads like the breakup of a relationship but is in fact the literal interpretation of the wilting and of a : "Black stemmed, orange trimmed/with the slighest wind I'm fallen from you." "Naheo" is a tribute to Summer's Native American roots, while "Curious White Boy" is a Black woman's response to her white lover after she realizes he has become involved with her out of some sense of racial guilt: "Another fantasy?/Coffee-colored remedy for your hangover from history."