Discus (Symphysodon spp.) are a genus of three species of cichlid freshwater fishes native to the Amazon River basin.[1] Discus are popular as aquarium fish and their aquaculture in several countries in Asia is a major industry.[2][3][4][5]

Discus belong to the genus Symphysodon, which currently includes three species: The common discus (Symphysodon aequifasciatus), the Heckel discus (Symphysodon discus), and a new species which has been named Symphysodon tarzoo.[6] However, a further investigation published in August 2007[7] suggested that the genus held the three species: S. aequifasciatus (the green discus), S. haraldi (the blue/brown/common discus) and S. discus (the Heckel discus). Both studies suggest three species; the only disagreement is in the scientific names for each. 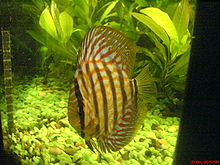 Like cichlids from the genus Pterophyllum, all Symphysodon species have a laterally compressed body shape. In contrast to Pterophyllum, however, extended finnage is absent giving Symphysodon a more rounded shape. It is this body shape from which their common name, "discus", is derived. The sides of the fish are frequently patterned in shades of green, red, brown, and blue. The height and length of the grown fish are both about 20–25 cm (8–10 in).[citation needed] 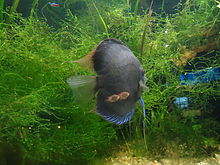 Discus with two of its young nearby

Another characteristic of Symphysodon species is their care for the larvae. As for most cichlids, brood care is highly developed with both the parents caring for the young. Additionally, adult discus produce a secretion through their skin, which the larvae live off during their first few days. This behaviour has also been observed for Uaru species. However when bred in captivity the larvae will tend to live off their parents secretion for up to 2 weeks.[8]

Symphysodon species inhabit the margins of floodplain lakes and rivers in the Amazon Basin of lowland Amazonia[9], where its is part of the highly diverse Neotropical fish fauna.

The three species of Symphysodon have different geographic distributions. S. aequifasciatus occurs in the Rio Solimões, Rio Amazonas and the Río Putumayo-Içá in Brazil, Colombia and Peru. In contrast the distribution of S. discus appears to be limited to the lower reaches of the Abacaxis, Rio Negro and Trombetas rivers. S. tarzoo occurs upstream of Manaus in the western Amazon.[citation needed]