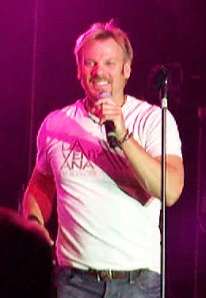 Later that same year, Vassar was signed to as a recording artist. His debut album, "Phil Vassar", was released in early 2000; it produced five hit singles on the U.S. "Billboard" country singles charts and was certified gold in the United States. He followed it in 2002 with "", "Shaken Not Stirred" in 2004, and finally "Greatest Hits, Vol. 1" in 2006 before Vassar left the label for . His first album for that label, "", was released in early 2008.

Overall, Vassar's five studio albums have produced sixteen singles on the "Billboard" charts, including two Number Ones: 2000's "Just Another Day in Paradise" and 2004's "".

He attended on a track scholarship, where he was a member of Theta Chi Fraternity, eventually graduating with a degree in business administration. While in college, however, Vassar had taken up playing the piano, and eventually found work as a singer in clubs. He had decided to move to in order to pursue a career in music; initially, he found work at various odd jobs such as bartending. Eventually, he was signed to a small publishing contract, but was unable to land any hits on this contract.

In 1995, Vassar and a friend opened an Italian restaurant called Nathan's in a Nashville suburb. The restaurant regularly featured live music and songwriters' nights, and soon, Vassar himself began performing at his restaurant, performing his own material as well as s. One of the restaurant's patrons heard Vassar's music and sent one of his demo tapes to his father, pop singer Engelburt Humperdinck. Humperdink recorded one of Vassar's songs ("Once in a While"), and soon afterward, Vassar landed his second publishing contract, this time with .

Starting in the late 1990s, Vassar began writing songs which were recorded by several country music artists. Among the artists who recorded his material were BlackHawk ("Postmarked Birmingham"), (""), ("", "I'm Alright"), (""), (""), and ("I Was"). Of these, "Bye, Bye", "I'm Alright", and "Right on the Money" all reached Number One on the country charts. "Bye, Bye" also earned Vassar his first award for Song of the Year. Furthermore, ASCAP named him as 1999's Songwriter of the Year.

In late 1999, Vassar was signed to his first recording contract, with the label. His debut single, "", was issued that year, and by mid-2000 the song had gone on to peak at #5 on the "Billboard" country charts. The song, about two friends whose lives exceeded the expectations of her high school peers, was inspired by Vassar's own life (the male protagonist being a former sports star turned songwriter), while actress served as the inspiration for the female character in the song.

The lead-off single to Vassar's self-titled debut album, "Carlene" was followed by "Just Another Day in Paradise", which became the singer's first Number One hit. Shortly after that song peaked, another song written by Vassar reached the top of the country charts — Tim McGraw's "My Next Thirty Years". This, along with 's "Live It Up", would be among Vassar's last contributions for another artist. Overall, "Phil Vassar" produced three more singles: the #16 "Rose Bouquet", "Six-Pack Summer" at #9, and finally "That's When I Love You", a #3. In addition, the album itself earned a gold certification from the . Its success led to tours with .

"" was the title of Vassar's second album, released in 2002, the same year that he married the former Julie Wood, co-writer of his single "That's When I Love You". The album's autobiographical title track served as its lead-off single, reaching a peak of #5 on the country charts; the album itself peaked at #4 on the charts. While "American Child" was climbing the charts, Arista tested another song written by Vassar, entitled "This Is God"; this song was so well-received by test audiences that "American Child" was recalled and re-released in early 2003. (The re-issue featured "This Is God" along with a cover of 's "".) "This Is God" was subsequently issued as the album's second single, becoming a Top 20 country hit; however, the album's third single ("Ultimate Love") fell short of the Top 40.

"Shaken Not Stirred" and "Greatest Hits"

Vassar's first greatest hits compilation, "Greatest Hits, Vol. 1", was issued in 2006. This album featured not only the greatest hits from his first three studio albums, but also his renditions of several songs that he had written for other singers before becoming a country star in his own right — "Bye, Bye", "I'm Alright", "My Next Thirty Years", and "Little Red Rodeo".

The album's lead-off single was the ballad "", a ballad in which the narrator leaves a friend's funeral with the realization that he has not been paying enough attention to his wife; Vassar was inspired to write "Last Day of My Life" after attending the funeral of his friend Robert Byrne, co-writer of Vassar's 2001 single "Rose Bouquet".

"Prayer of a Common Man"

In March 2007, Vassar signed to . [cite web |url=http://www.thatscountry.com/am2/publish/Country_News_2/003285.shtml |title=Phil Vassar signs with Universal South Records |accessdate=2008-05-03 |date=2007-03-05 |work=That's Country] His first single for the label, "This Is My Life", was released in mid-2007, peaking at #35 on the country music charts. Succeeding it was ""; a - collaboration, this song was originally recorded in 1999 by Canadian country singer under the title "It's a Beautiful Thing". By April 2008, "Love Is a Beautiful Thing" had reached Top 5 on the country charts, and Vassar's first album for Universal South (entitled "") was released. A third single from this album, "I Would", was issued in July 2008.