A discharge petition is a means of bringing a bill out of committee and to the floor for consideration without a report from a Committee and usually without cooperation of the leadership. Discharge petitions are most often associated with the U.S. House of Representatives, though many state legislatures have similar procedures. They are used when the chair of a committee refuses to place a bill or resolution on the Committee's agenda; by never reporting a bill, the matter will never leave the committee and the full House will not be able to consider it. A successful petition "discharges" the committee from further consideration of a bill or resolution and brings it directly to the floor. The discharge petition, and the threat of one, gives more power to individual members of the House and usurps a small amount of power from the leadership and committee chairs. The modern discharge petition requires the signature of an absolute majority of House members (218 members). 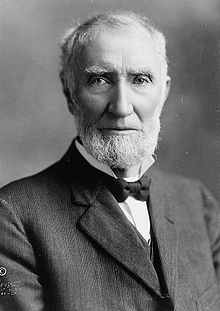 Imperious Speaker Joseph G. Cannon faced a revolt from his own party, which curtailed the Speaker's powers via the discharge petition and stripping him of direct leadership of the Rules Committee.

An early form of the discharge petition was introduced into House rules in 1910 as part of a series of measures intended to check the power of the disliked Speaker Joseph Gurney Cannon. The modern version, however, was adopted in 1931 by the 71st House. In 1935, the rules were changed so the number of signatures required to force a vote went from one-third of the chamber (145 votes) to an absolute majority (218 votes).[1]

Originally, signatories to a discharge petition were secret. Only once the petition acquired a majority would the clerk announce who signed. In 1993, the procedure was changed to make it public at every step of the process, with signers published in the Congressional Record. This change was spearheaded by Jim Inhofe (R-OK).[2]

There are three basic forms of discharge petition:[1]

Once the House acts on a discharge motion, any further discharge petitions on the same subject are precluded for the remainder of the session of Congress (until the calendar year's close, normally). This is only relevant if the petition succeeds but the bill is rejected anyway, despite a majority of the House apparently wishing to bypass the Committee. If the motion is budget-related, then the Committee of the Whole is convened to amend it.[1]

A discharge petition may only be brought after a measure has sat in committee for at least 30 legislative days[3] without being reported; if the matter is considered as a special rule to the Rules Committee, then the period is 7 days instead. Once the requisite number of signatures is reached, the petition is placed on the Discharge Calendar, which is privileged business on the second and fourth Mondays of each month. This layover is waived during the last six days of a session before sine die adjournment.[4] At the end of each session of Congress, any discharge petitions remaining unresolved or lacking the required number of signatures are removed from consideration.[1]

563 discharge petitions were filed between 1931 and 2003, of which only 47 obtained the required majority of signatures. The House voted for discharge 26 times and passed 19 of the measures, but only two have become law.[1][5] However, the threat of a discharge petition has caused the leadership to relent several times; such petitions are dropped only because the leadership allowed the bill to move forward, rendering the petition moot. Overall, either the petition was completed or else the measure made it to the floor by other means in 16 percent of cases.[1]

When signing of a petition was secret – or, more specifically, confirmation that it was signed was secret, as a Representative could claim whatever they liked – petitions were generally only used for serious discontent in the majority. The secrecy also meant that members could claim to be for a piece of legislation while at the same time taking no action to force a vote on such legislation. With this secrecy removed, it became more difficult to dissemble in such a way; it also opened signers to more direct retribution from the leadership. Under the old system, if a petition was unsuccessful, the leadership would never know if a particular Representative signed the petition. If it was successful, all the "defectors" would at least be in the same boat. With open signing, the leadership can exert maximum pressure on stopping the last few signatures. Those who make the last few signatures open themselves to especially severe payback, as early signers could argue privately that they were only posturing, and didn't think the petition would ever pass. A strong counter-campaign from the leadership helped stop the proposal of William Zeliff (R-NH) and Rob Andrews (D-NJ) of "A-Z spending cuts," for example; the proposal received 204 signatures, but could not muster the last 14.[1]

The removal of secrecy also encourages discharge petitions that exist merely to take a public stand on an issue. Since secrecy was removed in the U.S. House, thirty petitions have attained 60 signatures or fewer.[1]

A notable situation where the threat of a discharge petition is extremely relevant is if the majority party in the House loses its majority for some reason, such as due to defections or deaths. If the old majority leadership refused to stand aside, the new majority could file a discharge petition to elect a new Speaker. This situation has not yet occurred.

The most recent successful discharge petition was the Bipartisan Campaign Reform Act, known as McCain-Feingold in the Senate and Shays-Meehan in the House. Starting in 1997, several attempts were made to bring it to the floor via the discharge petition. It finally passed in 2002, and the Senate passed it 60–40, narrowly avoiding a filibuster.

1993 saw the Discharge Petition Disclosure Bill passed. The bill, which made the rule change requiring public disclosure of signers, was itself filed with a discharge petition. The Balanced Budget Amendment received 218 signatures twice, in 1992 and 1993; however, it did not pass the Senate.

Prior to 1993, one must go back to 1985 to find another successful discharge petition in which the process was carried to its conclusion, rather than the bill dying or the leadership allowing the bill out of committee (since as noted above, some bills with pending petitions the leadership has simply relented on). This was the Firearm Owners Protection Act, known as McClure-Volkmer. The Act was a scaling back of gun control legislation that made it easier for gun shows to operate without government interference. The Senate passed the bill, but House Judiciary chair Peter W. Rodino, Jr. (D-NJ) declared it "dead on arrival."[7] In response, the National Rifle Association launched a strong campaign to pass the bill in the House via discharge petition. Rather than let the Senate version of the bill out of committee, Rodino instead proffered a compromise piece of legislation with William J. Hughes (D-NJ). However, the discharge petition succeeded and the Senate version was passed after minor amendments were added.[7]

Versions other than the U.S. House

Versions of the discharge petition vary widely in state legislatures. Some use petitions like the House, though others allow a motion to be made to discharge the committee, forcing legislators to vote. The threshold for discharge also varies. For instance, Wisconsin has similar rules to the House; a simple majority is required to succeed, though a motion or a petition are both acceptable.[6] The Kansas Legislature requires 56 percent approval (70 members). Pennsylvania allowed only 30% of its members to recall a measure from committee for a time. This was changed in 1925 to a majority of the Legislature, drastically curtailing the number of recalls; still, only 25 (about 10 percent) petition-signers are required to force a motion to be voted on by the floor. Though technically a vote on whether the bill can proceed, the bill's supporters usually claimed that the vote was a vote on the bill itself, providing opportunities to the minority party to, at the least, force the majority party to be put on record as opposing a popular bill.[6]

Both the House and the Senate have created an expedited process for Congressional review of executive branch regulations (often used against "midnight regulations"), providing an especially quick timetable for consideration of a joint resolution to overturn a particular regulation. As part of this process, Senators may use a "discharge petition" to discharge a Senate committee from consideration of the disapproval resolution. While using the same term as the House process, its use in the United States Senate has few similarities to the House process described above and is limited only to disapproval resolutions created under the conditions of this congressional review process.[citation needed] There also exists a "discharge resolution" in which non-controversial measures do not have to go through committee and are submitted to a voice vote.[8] Discharge resolutions, however, must be unanimous and are related loosely at best to discharge petitions.

Analogs to the discharge petition in parliamentary systems are rare. In such systems the Prime Minister often has even more control over the agenda than the Speaker of the House does in the United States. The closest may be a "conscience vote" (sometimes referred to as a "free vote"), in which members are released from party ties and allowed to vote as they wish on especially controversial issues.