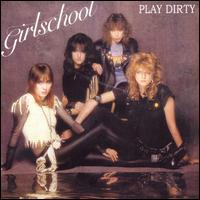 "Play Dirty" was the fourth studio album by British heavy metal band, , released on in 1983 and produced by and from the band .

It was the first Girlschool album not to enter the UK Top 40 album chart and signalled a general downturn in their career, along with an inclination towards a more soft rock sound. left the band soon after the release and an intended US-tour never materialised.

In the UK, three singles were lifted from the album, each having a picture-sleeve:

In 2005, Castle subsidiary Sanctuary re-issued the album with bonus tracks, although none were new to CD, having been on compilation albums.