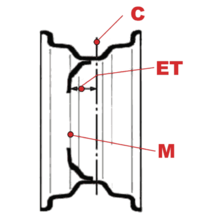 The offset of a vehicle's wheel is the distance between the centerline of the wheel and the plane of the hub-mounting surface of the wheel. It can thus be either positive or negative, and is typically measured in millimeters. Offset has a significant effect on many elements of a vehicle's suspension, including suspension geometry, clearance between the tire and suspension elements, the scrub radius of the steering system, and visually, the width of the wheel faces relative to the car's bodywork.

To maintain handling characteristics and avoid undue loads on bushings and ball joints, the car manufacturer's original offset should be maintained when choosing new wheels unless there are overriding clearance issues.

Wheels are usually stamped with their offset using the German prefix "ET", meaning "Einpresstiefe" or, literally, "press depth". An example would be "ET45" for a 45mm offset.

Calculating the offset of a wheel