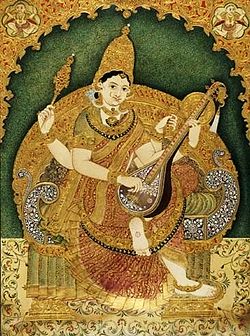 Mysore painting (Kannada: ಮೈಸೂರು ಚಿತ್ರಕಲೆ) is an important form of classical South Indian painting that originated in the town of Mysore in Karnataka. Painting in Karnataka has a long and illustrious history, tracing it’s origins back to the Ajanta times (2nd century B.C. to 7th century A.D.) The distinct school of Mysore painting emerged from this legacy around the time of the reign of the Vijayanagar Kings 1336-1565 A.D. The rulers of Vijayanagar and their feudatories encouraged literature, art, architecture, religious and philosophical discussions and thus the Vijayanagar School of Painting of which both Mysore and Tanjore traditional painting are off-shoots, made a great historical contribution to the art of India. Mysore paintings are known for their elegance, muted colours, and attention to detail. The themes for most of these paintings are Hindu gods and goddesses and scenes from Hindu mythology.[1] 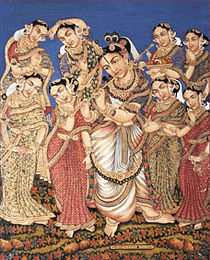 The fall of the Vijayanagar Empire in 1565 A.D resulted initially in distress for scores of families of painters who had been dependent on the patronage of the empire. However Raja Wodeyar (1578–1617 A.D) provided a vital service to the cause of painting by rehabilitating several families of painters of the Vijayanagara School at Srirangapatna.[2]

The successors of Raja Wodeyar continued to patronize the art of painting by commissioning the temples and palaces to be painted with mythological scenes. However none of these paintings have survived due to Hyder Ali and Tippu Sultan’s ascendance to power and the consequent ravages of war between them and the British. After the death of Tippu Sultan in 1799 AD the state was restored to it’s original royal family of Mysore and it’s ruler Mummadi Krishnaraja Wodeyar (1799-1868 A.D.) ushered in a new era by reviving the ancient traditions of Mysore and extending patronage to music, sculpture, painting,dancing and literature. Most of the traditional paintings of the Mysore School, which have survived until today, belong to this reign. On the walls of Jagan Mohan Palace, Mysore(Karnataka), the fascinating range of paintings which flourished under Krishnaraja Wodeyar can be seen; from portraits of the Mysore rulers, their family members and important personages in Indian history, through self-portraits of the artists themselves which Krishnaraja Wodeyar coaxed them to paint, to murals depicting the Hindu pantheon and Puranic and mythological scenes.[3]

The most famous of such manuscripts is the Sritattvanidhi, a voluminous work of 1500 pages prepared under the patronage of Mummadi Krishnaraja Wodeyar. This pictorial digest is a compendium of illustrations of gods, goddesses and mythological figures with instructions to painters on an incredible range of topics concerning composition placement, colour choice and mood. The ragas, seasons, eco-happenings, animals, and plant world are also effectively depicted in these paintings as co-themes or contexts.[4]

Other Sanskrit literary sources such as the Visnudharmottara Purana, Abhilasitarthacintamani and Sivatatvaratnakara also throw light on the objectives and principles of painting, methods of preparing pigments, brushes and the carrier, qualifications of the citrakar (painter) the principles of painting and the technique to be followed.[5]

The ancient painters in Mysore prepared their own materials. The colours were from natural sources and were of vegetable, mineral or even organic origin such as leaves, stones and flowers. Brushes were made with squirrel hairs for delicate work but for drawing superfine lines a brush made of pointed blades of a special variety of grass had to be used. Due to the long-lasting quality of the earth and vegetable colours used, the original Mysore paintings still retain their freshness and lustre even today.[6]

Mysore Paintings are characterized by delicate lines, intricate brush strokes, graceful delineation of figures and the discreet use of bright vegetable colours and lustrous gold leaf. More than mere decorative pieces, the paintings are designed to inspire feelings of devotion and humility in the viewer. The painter’s individual skill in giving expression to various emotions is therefore of paramount importance to this style of painting.[7]

The first stage of Mysore Painting was to prepare the ground; paper, wood, cloth or wall grounds were variously used. The paper board was made of paper pulp or waste paper, which was dried in the sun and then rubbed smooth with a polished quartz pebble. If the ground was cloth it was pasted on a wooden board using a paste composed of dry white lead (safeda) mixed with gum and a small quantity of gruel (ganji). The board was then dried and burnished. Wood surfaces were prepared by applying dry white lead, yellow ochre and gum, and walls were treated with yellow ochre, chalk and gum. After preparation of the ground a rough sketch of the picture was drawn with crayon prepared from the straight twigs of the tamarind tree. The next step was to paint the furthest objects such as sky, hill and river and then gradually animal and human figures were approached in greater detail. After colouring the figures, the artists would turn to elaboration of the faces, dress and ornaments including the gesso work (gold covering), which is an important feature of Mysore painting.[8]

Gesso work was the hallmark of all traditional paintings of Karnataka. Gesso refers to the paste mixture of white lead powder, gambose and glue which is used as an embossing material and covered with gold foil. The gesso work in Mysore paintings is low in relief and intricate as compared to the thick gold relief work of the Tanjore School. Gesso was used in Mysore painting for depicting intricate designs of clothes, jewellery and architectural details on pillars and arches that usually framed the deities. The work was taken up in the morning when the base of the gold work on the painting was still moist so as to hold the gold foil firmly. After allowing the painting to dry, glazing was carried out by covering the painting with thin paper and rubbing over it with a soft glazing stone known as kaslupada kallu. When the thin paper was removed the painting shone brightly and looked resplendent with the combination of gold and a variety of colours.[9]