A Fistful of Dynamite

A Fistful of Dynamite 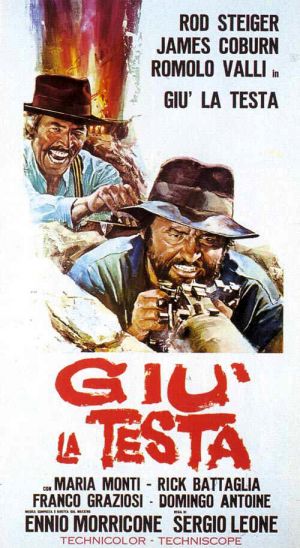 "A Fistful of Dynamite" is a 1971 film directed by (original Italian title: "Giù la Testa" ("Duck Your Head!"); also known as "Duck, You Sucker" and "Once Upon a Time... the Revolution". Leone was known to prefer the title "Duck, You Sucker", which he was convinced was a frequently used American phrase. Its plot is centered on two individuals, a poor Mexican bandit (played by ) and an ex- revolutionary (), who meet during the turbulent . It is the second part of a loose of epic called "".

The setting is at the time of the Revolution. Juan Miranda (), by all appearances a poor , is picked up by a stagecoach carrying a group of the wealthy Mexican upper class. The stagecoach driver, thinking it a great joke, lets him ride with these elite snobs who immediately treat Juan as if he were an animal, talking about him as if he were too unintelligent to understand their cruel taunts. Soon they drive past a group of poor Mexicans, mostly children, and as the stagecoach slows to climb a steep hill the driver orders them to help push. Guns suddenly appear and drivers are killed. They are bandits and Juan Miranda is their leader (and for many, their father). They set about robbing the rich passengers of everything they own including most of their clothing. Although we are not shown, it is suggested that Juan rapes the female who was aboard the carriage. All are bundled into an abandoned cart, tied together, and set rolling down the hill where they land in a pile of mud.

Soon after, Juan and his gang meet Sean Mallory (), an explosives expert on the run from the British. They call him John because the pronunciation of his name is foreign to them. Noting his skill with explosives, Juan tries to persuade him to join a raid on the Mesa Verde national bank. John in the meantime has made contact with the revolutionaries and intends to use his dynamite in their service.

The bank is attacked as part of an orchestrated revolutionary attack on the army organized by Dr. Villega. Juan is shocked to find that the bank has no funds and instead is used by the army as a political prison. Juan and his family end up freeing hundreds of prisoners, causing Juan to become a "great, grand, glorious hero of the revolution." An angry Juan doesn't want to be a hero; he wants the money.

The revolutionaries are chased by the army into the hills. John and Juan volunteer to stay behind with two machine guns and dynamite. Thanks to John's demolition skills, much of the army's detachment is destroyed while hiding under a bridge that is blown to bits. Colonel Günther Ruiz, who commands a German armed vehicle, survives. After the battle, John and Juan find most of their comrades, including Juan's family and children, have been murdered by the army in a cave. Engulfed with grief and rage, Juan goes out to fight the army single-handedly and is captured. John sneaks into camp he sees executions of revolutionaries by firing squads, informed on by Dr. Villega, who has been tortured by Colonel Günther and his men. This evokes memories of a similar betrayal by John's best friend in Dublin. Juan faces a firing squad of his own, but John arrives with dynamite just in time. They escape on his motorcycle.

John and Juan hide in the animal coach of a train. It stops to pick up the tyrannical Don Jaime, who is fleeing with a small fortune in fear of the revolutionary forces belonging to and . The train is ambushed and Juan kills Jaime, choosing to avenge his Family over receiving the riches. As the doors to the coach open, Juan is greeted by a large crowd and again unexpectedly hailed as a great hero of the Revolution.

On a train with commanders of the revolution, John and Juan are joined by Dr. Villega, who has been freed. John alone knows of Villega's betrayal. They learn that Pancho Villa's forces will be delayed by 24 hours and that an army train carrying 1,000 soldiers and heavy weapons, led by Colonel Ruiz, will be arriving in a few hours, which will surely overpower the rebel position. John suggests they rig a locomotive with dynamite and send it head on. He requires one other man, but instead of picking Juan, who volunteers, he chooses Dr. Villega. It becomes clear to Villega that he knows of the betrayal. John nonetheless pleads with him to jump off the locomotive before it hits the army's train, but Villega feels guilty and stays on board. John jumps in time and the train is derailed.

The revolutionaries' ambush is successful, but as John approaches to meet Juan, he is shot in the back by Colonel Ruiz. An enraged Juan riddles the Colonel's body with bullets. As John lays dying, he continues to have memories of his best friend and a young woman both apparently loved. John recalls killing the friend after being betrayed by him to the law. In the present, Juan kneels by his side to ask about Dr. Villega. John keeps the doctor's secret and tells Juan that he died a hero of the revolution. As Juan goes to seek help, John, knowing his end is near, blows himself up in a great explosion. The movie ends with Juan staring at the burning remains, asking forlornly: "What about me?"

The movie was written by , and . Leone was deeply involved with the project from the beginning, but did not originally intend to direct the picture himself. , his original choice for director, soon abandoned the film due to perceived lack of control. Leone then recruited his regular to direct. However, Coburn (who had turned down the lead in "" just seven years previously) and Steiger refused to play their roles unless Leone himself directed. He agreed, and Santi was relegated to work. Because of these changes, some fans of the film contend that "A Fistful of Dynamite" is actually two films in one (the first, more humorous part dealing with Mesa Verde whereas the second, more serious part deals with the revolution).

Compared to Leone's previous films, the Clint Eastwood "man with no name" trilogy and "", his new work "A Fistful of Dynamite" gained lukewarm reviews and little notice. One reason could be Leone's insistence on using the "Duck, You Sucker" title, which gave potential movie-goers the mistaken impression that the film would be a comic western. ("Duck, You Sucker" is a fairly direct translation of the repeated phrase of the film, "Giù la Testa, !" in the Italian version, where however the movie was titled just "Giù la Testa"). Leone was convinced the phrase "duck, you sucker" was a popular American expression, contrary to the advice of his American stars Rod Steiger and James Coburn that they had never heard of that phrase. When the film was edited for a re-release in 1972, it was re-titled "A Fistful of Dynamite" by the studio, hoping to capitalize on Leone's first hit, "".

Although the film is often overlooked in Leone's œuvre, many critics have praised its and its quirky score by . The film itself has gained greater stature over time.

Arguably, "A Fistful of Dynamite" contains more social commentary than any other Leone film. The film opens with a quote from about the nature of s and class struggle. [ (March 1927), [http://www.fordham.edu/halsall/mod/1927mao.html "Report on an investigation of the peasant movement in Hunan"] . "Selected Works of Mao Tse-tung", vol. I, pp. 23–29. Beijing: Foreign Languages Press, 3rd printing, 1975. The quoted passage is: " [A] revolution is not a dinner party, or writing an essay, or painting a picture, or doing embroidery; it cannot be so refined, so leisurely and gentle, so temperate, kind, courteous, restrained and magnanimous. A revolution is an insurrection, an act of violence by which one class overthrows another."] Throughout the course of the film Leone delves deep into the class differences that shaped Mexico during its bloody revolution. The main villain, Gunter Ruiz (), is presented as a Nazi-like tank commander, complete with an armored car. Throughout the movie there are numerous scenes of execution of revolutionaries by Mexican . These touches were intended by Leone - who grew up in 's Italy during - to represent a parallel with . The movie was also, despite Leone's left-wing sympathies, meant as a sort of criticism of other left-wing "revolutionary" film makers such as and the recent spate of so-called "" which had predominated in the Spaghetti Western genre. For this, the film suffered a great many edits and cuts. To date, many versions of the film have been released, each one offering previously unseen material.

The film's rugged portrayal of revolution forms an interesting counterpoint to the , which frequently dealt with the Russian Revolution or , and portrayed these events in a more romanticised light.

In 2003, following the restoration of Leone's far more popular "", MGM re-released "A Fistful of Dynamite" in higher-resolution picture with an enhanced soundtrack for the complete 158-minute cut. Leone's preferred title "Duck, You Sucker" was also reinstated. The restored version had a brief arthouse theatrical run in the U.S. and was packaged in a 2-disc DVD special edition, which was not made available in the U.S. market until 2007.

Names of the film