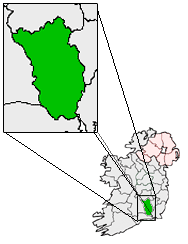 Graiguenamanagh ("Gráig na Manach", meaning "Village of the monks", in Irish), also spelled Graignamanagh, is a in , Ireland. It is located on the R705 by the with on the at the foot of . It is home to , the largest and perhaps the finest of the thirty-four medieval abbeys in Ireland. The abbey, which takes its name from the little river Duiske (Blackwater) which joins the Barrow here, was founded by William Marshall in 1204 and was suppressed by Henry VIII in 1536. Significant remains of the exist to the rear of the houses that line the east side of Lower Main Street. The abbey's large "Early English" gothic church, was magnificiently restored in the 1970s and in its northern aisle a model of the monastery shows the abbey as it was in the fourteenth century.,

The River Barrow, a significant highway from time immorial,was developed as a commercial navigation in the mid seventeen hundreds and Graiguenamanagh served as the main base for commercial s operating on the river until barge traffic ceased in 1959. The barges that at one time lined the quaysides are now replaced by some one hundred pleasure craft.

Near to the town are the ed remains of the monastery of Ullard, founded by in the . St Fiachra subsequently moved to where he is known as St Fiacre and founded the celebrated monastery at . He is the of s and taxi drivers; French s are often known as fiacres in his . Some few miles downstream from Graiguenamanagh the ruins of the ancient monastic establishment at St. Mullins are beautifully situated on a site of great historic interest.

Walking and hillclimbing are among the more popular pursuits of Graiguenamanagh area, with the beautiful Barrrow Valley and nearby Brandon Hill providing scope for the either a gentle stroll or a vigorous, day-long hike. In addition to the Barrow's aquatic failities, including the rowing club, the town is home to two main sporting clubs, the G.A.A and the soccer club, Highview Athletic. In recent years, the G.A.A club, has developed its amenities to a consideralbe extent by laying a new pitch and providing fine indoor facilities.

In the centre of the town, Graiguenamanagh's very beautiful and much used modern library, in addition to its normal functions, hosts periodic art exhibitions and features a comphrensive Local History Section while providing an internet service to the public.Adjacent to the library is The Abbey Centre, the home of a Christian Art Gallery and small museum. Here also for the genealogically inclined may be perused the Graiguenamanagh Parish Birth and Marriage Registers.