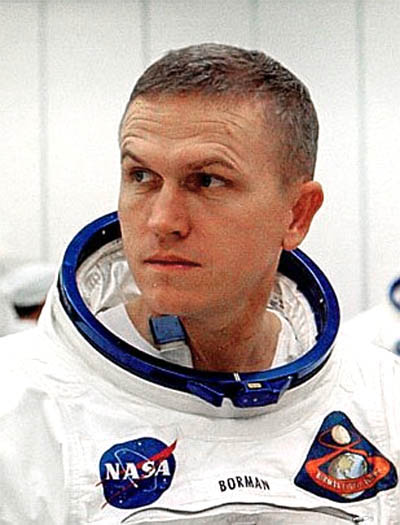 Frank Frederick Borman, II (born , ) is a retired , best remembered as the Commander of , the first mission to fly around the , making him, along with fellow crew mates and Bill Anders, the first of only 24 men to do so. He was also the (CEO) of from 1975 to 1986. Frank Borman is a recipient of the . In the miniseries "From the Earth to the Moon", Borman was played by David Andrews.

Borman was born in . Because he suffered from numerous sinus problems in the cold and damp weather, his father packed up the family and moved to the better climate of , which Borman considers his home town. He started to fly at the age of 15. He is a graduate of the . He graduated from the in 1950 where he served as an Army Football Manager, and along with part of his graduating class, he entered the (USAF) and became a fighter pilot. He received his degree in from the in 1957. Later, Borman was selected for the USAF test pilot school and became a test pilot. He was selected for the second NASA astronaut group in 1962.

Borman flew two flights while at NASA. He is one of just five astronauts to fly a first mission as a Commander (the others being , , ,and ). He commanded in 1965 with astronaut Jim Lovell. This was the long-endurance flight of the Gemini program, staying in orbit for fourteen days. The mission also featured the first space , with . Gemini 7 was the target vehicle while Gemini 6A actively pursued. Upon achieving rendezvous, they took turns flying around each other taking both still pictures and movies. The two crafts came within one foot of each other. Borman's second flight was as commander of the Apollo 8 mission in December 1968. He flew with James Lovell again, and also with Bill Anders. The mission was originally planned as a -powered "Large Earth Orbit" mission to test tracking and communication, but this was changed into the first lunar orbit mission because the Lunar Module planned for the mission would not be ready for the December liftoff. Apollo 8 went into lunar orbit and made ten orbits of the Moon in December 1968. Apollo 8 is the only manned mission to fly to the moon without a Lunar Module. This was a springboard in NASA's on with . Borman was the only astronaut on the AS-204 Review Board which investigated the fire, which killed , Ed White, and . In April 1967, while still serving on the committee, Borman was one of 5 astronauts who testified before a Senate committee investigating the Apollo 1 fire. His testimony helped convince Congress that Apollo would be safe to fly again.

Borman retired from NASA and the Air Force in 1970, becoming special advisor to Eastern Air Lines. He rose in the ranks of Eastern, becoming CEO in December 1975. The business underwent many changes in the late 1970s, and despite a promising start, Eastern ultimately did not do well under Borman. Borman sold Eastern to and Texas Air after many contentious battles with labor unions, particularly the (IAM). Borman retired from Eastern in 1986. A strike by the IAM in 1989 eventually forced Eastern into bankruptcy and finally liquidation.

Borman returned to Tucson, Arizona, to reside, and as of 2006 has been living in , where he enjoys rebuilding and flying airplanes from World War II and the Korean era. His current favorite airplane is a dual-control Mustang fighter named "Su Su II". [ [http://www.adastra.adastron.com/aircraft/mustang/a68-187.htm Adastra Aerial Surveys - Vh-Agj (Ntu) ] ] Today, he is a member of the Society of Antique Modelers (SAM). [ [http://www.antiquemodeler.org SAM International Home Page ] ] Borman also gave the Commencement Address to the graduating class of 2008 at the University of Arizona.

* , 1976
* , 1978
* Recipient of award for longest engine run in 'A' Texaco with a scaled down Lanzo Bomber powered by an MVVS diesel. Whether or not he built the model is still a disputed matterFact|date=July 2008.